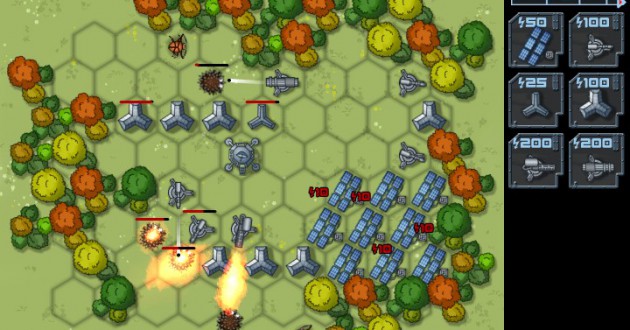 Aliens Defense is a little, ambitious Tower Defense Game with 17 different maps. The story is renowned, sequestered fortress and the vicious aliens are coming for you. Against those you own some towers and that's basically it. To select from there are unfortunately only a few different towers and a restricted gameplay, even though the basic idea is quite neat.

The evil aliens are, in case it helps them, able to attack their own defense as well. To pretend that, you have the option to place two different kinds of walls against it. Moreover, there are two various defense plants. Additionally, there are energy-producing solar plants. The pitch is constructed in a hexadecimal way and because of that quite unusual paths are put forth.

Take good care of the huge cannon, since you have to click on it at first and only after that you can decide the shooting direction.

To give you a good hint, try to hide behind certain landscapes and also try to open fire against you enemy as early as possible within the game. That is a good way to get yourself a good, strong defense as well as play your attacks more secured. It is also from great help to build one or two power plants right at the start, since those units will help you a lot to produce new units rapidly.

Controls are unusual in terms of placing your towers, because simply clicking on a towers already places it irreversibly on the pitch is sort of awkward and tough. After all or apart from that Aliens Defense is not exactly the greatest Tower Defense Game on earth. No upgrades, none regarding tactical decisions. You basically just have to read the map in the beginning of the game and simple whoops your opponent. Graphics are ok and the game doesn't seem to have major performance problems but to make it clear, the game is not more than average in the TDG scene.
Short and easy, no depth

If you enjoyed playing Aliens Defense, please take the time to click the "Like" Button below. We use the Facebook Likes to generate our Game-Charts and the more Likes a game got, the higher it ranks.