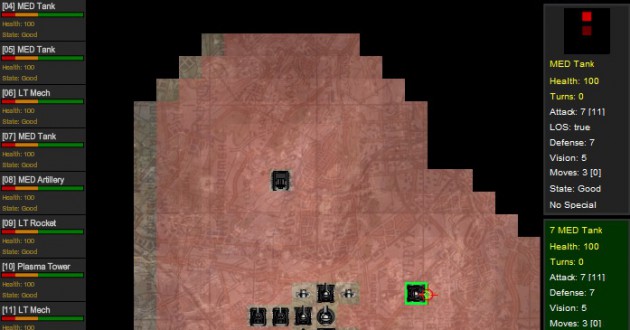 Armored Assault is a totally tactical turn-based Defending Game. You have certain units and a commander unit that will have to be protected against the enemy. Moreover, your troops have special abilities and if you think chess is a complicated matter, you probably shouldn't start playing Armored Assault. It strongly reminds me on the first episode of Battle Isle, but the game is still worth being played.

The game is played with a combined use of mouse and keyboard. Per turn you can move once and attack once. To be honest, you should really play the tutorial first. Armored Assault is far too complex too be described in only a few words. It is a difficult strategy game, that will only show its depth after intensely immerging into it. Here is a short list regarding the keyboard commands in Armored Assault: In addition to the regular game there i a campaign mode, a single mission and a online game mode. As you can see, there is something for everyone in it and epical battles are to be fought.

Graphics aren't that good and especially in single player mode units are hard to be identified once in a while, but the game possesses an incredible depth of play. You can get lost in it and seeing it from a tactical point of view, it is probably the most demanding and best game in its category. Armored Assault is definitely worth being played but for an average casual player it portrays a pretty high obstacle. At first, you have to become used to the game, learn all its rules and conceive bitter losses at first. After a while it will become better and better. The best tip is to play the first campaign in the beginning. You will get along in here pretty good and it is a good start to learn the basics of Armored Assault.
Wow, what a challenge and depth in it. Thumbs up!

If you enjoyed playing Armored Assault, please take the time to click the "Like" Button below. We use the Facebook Likes to generate our Game-Charts and the more Likes a game got, the higher it ranks.