Attack of the Furries 2 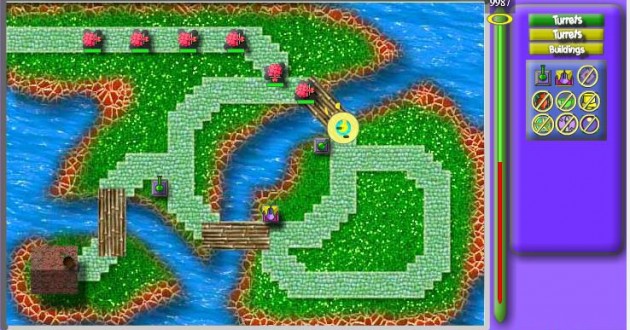 Description of Attack of the Furries 2

Attack of the Furries 2 - a true gem amongst all Tower Defense Games. As far back as the first part was released Attack of the Furries was a good one, but now with its sequel, a lot more things and features are waiting to be discovered. Above all, there are many custom settings regarding the game difficulty and the very special quality of Attack of the Furries 2 is the basic, rudimentary build-in economic system. Your job is to dig for mines, provide power for the towers and research tower upgrades. Especially, when choosing higher difficulty levels it is going to be a pain in the ass. But exactly that is what makes the difference.

Furthermore, graphics are pleasant and properly designed. Even if there is a huge war going on no stutters are jumping up. This game takes to player to the next level at a decent pace and is still suitable for beginners when choosing the simple mode. It is taking a while until mines and energy station are emerging in the game and that might produce the feeling not to be challenged enough at first. But still, there is a lot to be done since towers are constantly become outdated and need to be sold in order to have sufficient funds for the next generation.

Of course, we also have a few tips and hints for Attack of the Furries 2 at hand. You should also research in between two rounds. You basically only wait until the research is over and just after that you can already use your new upgraded one or use a new skill. The best time to buy towers is also in between rounds because especially in higher levels you will have a lot to do with the upgrades.

You best place your minor buildings such as the research center, mines and energy stations next to the pitch since they don't bother you there and can do their job calmly. Moreover, many mines are helpful since they can produce additional income and therefore provide more firing power.

In case you like the game or our page please don't hesitate and give us a Facebook-like a Google+1, a tweet or give us a link on your page to help us become more known across the net.

And now, I wish you great fun and a joyful time with Attack of the Furries 2. Destroy the bugs and flies!.

Attack of the Furries 2 offers fun for all player classes

If you enjoyed playing Attack of the Furries 2, please take the time to click the "Like" Button below. We use the Facebook Likes to generate our Game-Charts and the more Likes a game got, the higher it ranks.

Comments on Attack of the Furries 2