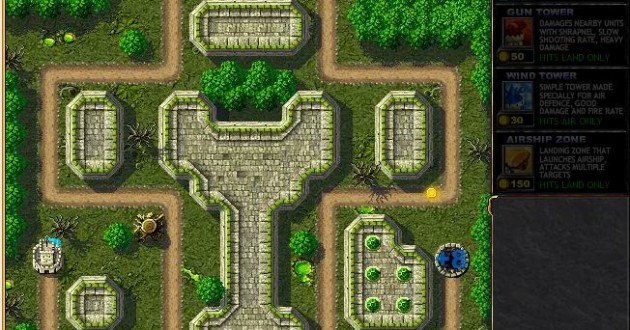 Azgard Tower Defense is a beautifully designed infinite-TD. You can build four totally different towers which are expandable and capable of improvements. Here you have to distinguish wether you either build an upgrade for the tower or simply grant it a level up. By choosing the upgrades the tower will receive further abilities and skills whereas the level up will result in more damage.

If you build up skillfully you will get far in Azgard TD and be able to play it for a long period of time. Most particularly, the setup is going to procure pleasure and once you know the ropes the game is simply amazing. As a good advice, always take care to have a good damage rate with your towers, since quality rules, not quantity.

The Archer Tower can attack air- and ground-units. The damage rate is quite low and the price of it is 20 $.

The Gun Tower costs 50 $ and opposes only ground-units. The Gun Tower has the ability of Splash, which means vicinity damage.

The Wind Tower's price is 30 $ and can only fight against air-units.

I love Azgard and it's a reat infinite Tower Defense Game.

If you enjoyed playing Azgard Tower Defense, please take the time to click the "Like" Button below. We use the Facebook Likes to generate our Game-Charts and the more Likes a game got, the higher it ranks.