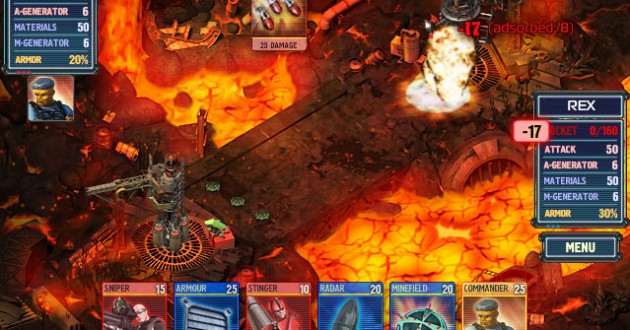 Back2 Back Commander is a Defense Game, which takes place in the outer space. You are located on a rocket and have to try to destroy the enemies rocket. The game is played turn-based and with tactical cards. You can either protect yourself, improve your rocket or attack. There is a campaign mode and a multiplayer option. We wish you all great fun with this Card Defense Game.

The blue cards are generally existent for protection or builtup, whereas red cards are there for attacking reasons. Once you survived a round you earn some level-up points, which help you to improve your units. According to the current cards you should consider starting the rocket as soon as possible (to reach full life power) or try to destroy the enemy. The prize for each card is written on to it. The costs for it can be earned by the respective generators and can be spent later on. An extra card is the commander. Once he arises he brings along not even his natural battle power. In that case you can achieve an extra here by upgrading your rocket to be a shooting star.

The campaign mode is divided into three parts. The first one is the easiest as expected, the last one the most skill demanding. Every time you pass one part a new card is earned. In total one can play 15 single missions.

That kind of game is well known and originates from the game Ants. The graphical adaption ist very good and it is of great fun to lock horns with the AI in here. Unfortunately, there is no option to build up your own card deck in single player mode and a lot depends on good luck. Nonetheless, Back2Back Commander is a neat little Defense Game and is good fun. Regarding the long term, motivation might decrease a little after a while.

If you enjoyed playing Back2Back Commander, please take the time to click the "Like" Button below. We use the Facebook Likes to generate our Game-Charts and the more Likes a game got, the higher it ranks.