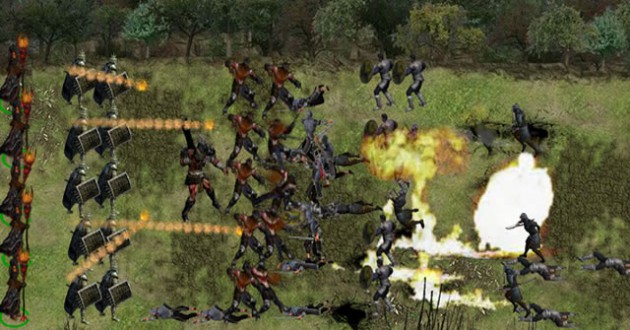 Description of Battle for Darkness

Battle for Darkness is a simple Defense Game, in which you play the monster side. But don't worry, in the end the good will will as usual. To me, that fact is quite gloomy. Every round you are going to run into battle with your army and try to reach forward as far as somehow possible. Every unit has a special ability and the only surprise is the formation of the own army. In case you like side-scroll games this is your bet.

At first, you can click on your units and upgrade them later on. Here, you got the ability to improve amount of men, fighting power and further settings. You earn the money, which is needed for it, by getting is far forward as possible. If you have more units you can formate them newly under the survey menu. That is working while the battle is taking place also. That makes it possible to place wounded units in one of the last rows of your formation to keep them alive much longer.

During the battle you can the special ability of the currently chosen unit. If you click on it, it is active for a while and has to recover a little later on. On the lower edge you can see the single armies and you can rearrange them or activate them, so that you become able to receive their special power.

Once you've lost the battle as usual, you return to the survey menu and build up the boys, again. With enough money you get a new army, but then you are in the situation that the whole battle needs to be fought once more from scratch.

A rarely dull Defense Game. Over and over the same battle. This doesn't seem to be the biggest idea of the universe. The only incentive lies in unlocking new units, which can become quite exhausting. Than again, a few coins aren't there and so on. To me, the game is no fun to play. Graphics aren't remarkable either. Our recommendation is to quickly find an other game on our page!
Yes, the same again and again.

If you enjoyed playing Battle for Darkness, please take the time to click the "Like" Button below. We use the Facebook Likes to generate our Game-Charts and the more Likes a game got, the higher it ranks.

Comments on Battle for Darkness