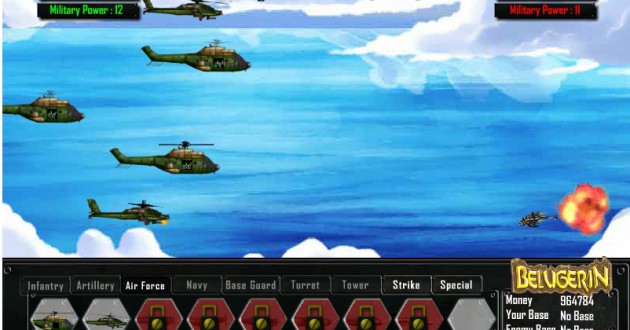 The third part of Battle Gear got released and can satisfy its reviewers. As you can see from the games name Battle Gear 3 you will get a military game packed with all kinds of war elements. You try to destroy the enemy's military base whereas you also try to protect your own camp. Now, a single player mode is included as well as a campaign mode, which is very large as always. All that will attract the player for a long while.

The game is played by mouse and keyboard. With the arrow keys you can scroll over the pitch and with the number pad you can send out units for build ups or troops to fight. In a single player game it all seems to be quite easy, but in the world campaign it is getting tough. Not only, you will have to stand on the battlefield, even researching units, formate troops and defend your own territory is your job. In here, the amount of squads you possess is as important as what kind of units you sent out to fight. In case you haven't played Battle Gear yet, you should definitely read the hint and tricks beforehand.

If you enjoyed playing Battle Gear 3, please take the time to click the "Like" Button below. We use the Facebook Likes to generate our Game-Charts and the more Likes a game got, the higher it ranks.