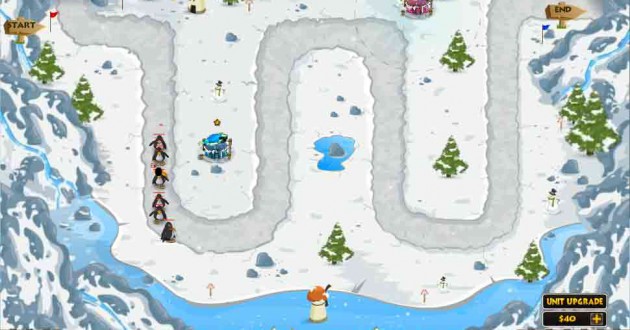 Description of Battle of Antarctica

In Battle of Antarctica it is about the last major battle for the Arctic Zone. Two penguin tribes encounter each other and start a war against each other. You take control over the defending tribe and build one tower after the other in this fabulous Tower Defense Game. In addition to that, there is a skill system, three difficulty levels and loads of enemies. Just to be warnend, this game takes a lot of your computer resources.

You build your towers along a track and try to catch everything that comes across. Each tower is upgradable in two ways. On the one way all defending facilities are powered up, on the other way those towers get star wise upgraded up to five times.

Some towers possess special abilities, albeit those aren't being used that often. Those abilities bear upon combustion and deceleration. Finally, there is the rocket tower (4000$), which really tidies up the pitch.

Regarding skill points you can be freely creative, but still you should keep an eye on widening your range. By doing so, your towers are able to shoot over two tracks already at the start of the game which gives you a good advantage. Later on, it really doesn't matter how you spend your points, because at the end of the day all of them are more or less equally helpful and extend your damage rating.

Unfortunately, the coding is very tough for your computer, but graphics are ok and neat. The music is bad and annoying as well. If I were you, just use the mute button. Still, Tower Defense Fans will recognize likenesses with When Penguins attack and its sequel ( Tips and tricks for When Penguins Attack 2 here (german)), which I prefer. Of course, there are other games that aren't in this league by far, but Battle of Antarctica has to lock horns with When Penguins Attack. In this regard, Battle of Antarctica gets blown away. But still, it is a nice game to play and there are more than enough missions. It is getting interesting, but only in later missions with the highest difficulty level activated. Have fun with Battle of Antarctica!

My son, is the penguin in you strong enough?

If you enjoyed playing Battle of Antarctica, please take the time to click the "Like" Button below. We use the Facebook Likes to generate our Game-Charts and the more Likes a game got, the higher it ranks.

Comments on Battle of Antarctica