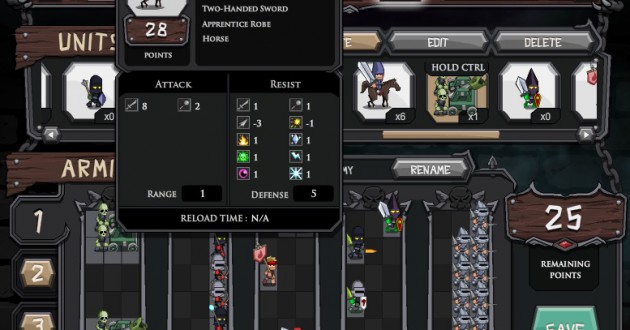 In BattleCry you take over the lead of a small army, which you moreover assemble yourself. In BattleCry it is not so much about tactics in the actual battle, it is more about dexterity and wisdom regarding the creation of the units. Next to the race you can design the equipment und their features. To make that more difficult you have to earn your amount of units and weapons at first. A thrilling campaign awaits you as well as battles against real human opponents.

At first you should play in offline mode and start to assemble your army. In the beginning you only possess simple melee units which are only equipped with swords. If you follow the trail of the campaign you earn more and more items as well as money. With the cash you can buy cards which can contain real heroe weapons if youre are lucky enough.

Under the army column you can have a look at your troops and can formate the free. On top of that, there are several horsemen, whom a certain specified bearing can be assigned. It is of use to let the archers shoot their arrows from behind as long as possible to move your melee units straight to the enemy. Down to the right you can see your Remaining points. Every army kann lead a maximum of units to battle determined by those points. Every incredient costs a certain amount of points and the better the single units becomes equipped the more expensive it will become. If you choose a balanced philosophy you are probably best of. If you think your army is well assorted you can click the next battle button and watch your army fight, If you win all is fine, if you lose you get a bit of cash to modify your troops. If you get stuck, you are best of to save cash for new items from the card deck.

A Defense Game, which is especially attractive to puzzle freaks. You can dedicate your whole time to make your units most suitable to the actual opponents within the campaign. The graphics are ok, the cash-saving necessity becomes annoying after a while and it is sad that you can only watch the battle itself. Despite that, BattleCry is the right game for those of us who have a cushy number and like to spend time with puzzles. For others who like action BattleCry is probably not the best choice.
It is all getting better with the next card deck...

If you enjoyed playing BattleCry, please take the time to click the "Like" Button below. We use the Facebook Likes to generate our Game-Charts and the more Likes a game got, the higher it ranks.