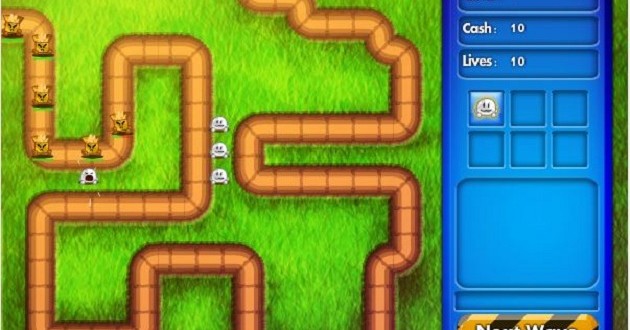 Biobots is a Tower Defense Game, which is propagating environmental protection in a funny way. Your towers are tiny garbage disposers, which is collecting all sorts of garbage that comes along the street and recycles it. Furthermore, there are several towers which take different tasks.

The white garbage bins take all kinds of garbage and are upgradable a couple of times. The first upgrade extends the range, the second one the speed and the third one the general power with which you collect the litter.

The red ones are able to process all kind of paper.

Here are a few more hints and tricks for Biobots Tower Defense:

If you like to beat the game in total you should care about a balanced built of each tower. Especially, at the end of the track singular towers can be from great help to you since they are able to paralyze the garbage. That way the Biobots have much more time to unfold their total power. Also, you should not spare white disposers because they occupy a quite high general damage rate.

After all, Biobots offers three different kind of maps, which vary from easy to difficult. Partially, you will have to sell your towers to survive one wave. It is recommendable to react quickly and think about a tactical plan as soon as possible. In most cases you can only just decide at the very beginning of the next round what kind of building you want to erect and how reasonable a certain trash barrel at a particular position would be.

Those who like the Tower Defense Game Biobots or our page, do not hesitate and give us a Facebook liken a Google +1 or a Tweet. By doing that we are going to become a little bit more famous and are able to put even more games online. A huge Thanks for that and of course for your visit here on our page, too.

If you enjoyed playing Biobots, please take the time to click the "Like" Button below. We use the Facebook Likes to generate our Game-Charts and the more Likes a game got, the higher it ranks.