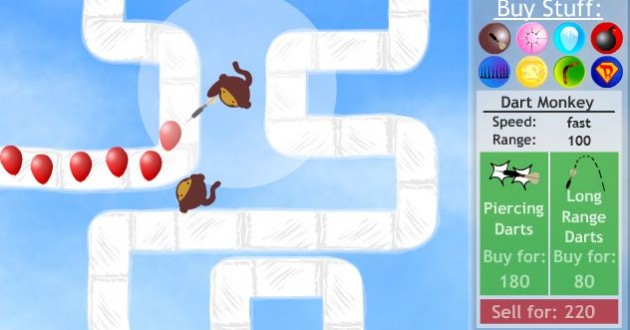 Bloons 2 only has only map, the same game concept as the first one, but there are a lot of new features in it. For instance, you can put down single baits onto the track and there is one new, additional tower. There are three difficulty levels and Bloons 2 TD demands a lot from you! It all seems to be a bit frumpy but if you like one or more parts of the series you should definitely give it a try.

In comparison to its prequel there are now monkeys that can throw a boomerang. This boomerang can destroy single targets and even smashes frozen balloons after it has been upgraded. Another new feature are road spikes which can put 30 balloons out of action at a certain spot. Those spikes can only be used once though. Now, there is also a totally new thing called monkey glue which is quite funny and slows down balloons and therefore keeps them on track for a longer period of time. This can be extremely helpful in case you need a little break or are trying to split the attacking balloons into fragments. The other participants in the game are the same as in Bloons 1 and if you've played that one already you will easily find your bearings. Sadly, there is only one map, again. The 50 levels are fine and the difficulty level increases at a moderate pace. Bloons 2 TD is a classic and shouldn't sink into obscurity.

Good in those days.

If you enjoyed playing Bloons 2 Tower Defense, please take the time to click the "Like" Button below. We use the Facebook Likes to generate our Game-Charts and the more Likes a game got, the higher it ranks.