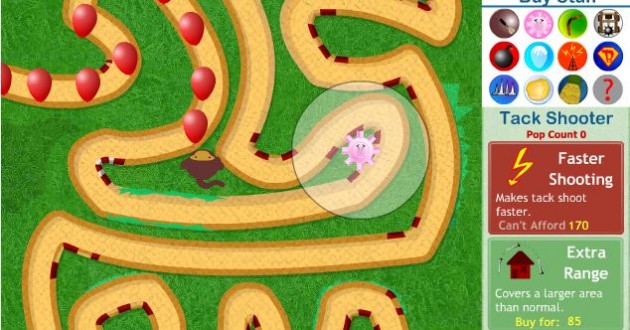 Bloons 3 Tower Defense is one of the great classics amongst the Tower Defense Games. Funny monkeys are trying to make the Bloons burst and that is gonna be awesome!

You can choose between a great selection of apes that fight against the Bloons with their weapons. You have to formate your Tower Defense Defenders in a way so that they are able to open fire on the attackers twice. That way, they cause more damage and are able to develop maximum power. If you're facing the task and plan wisely you can protect the the monkey-world and defeat all the Bloons.

Bloons 3 is a classical Tower Defense Game in which most is about tactics and dexterity. Graphics are fine and the game is also suitable for children.

Bloons 3 offers eight different towers as well as three traps on the track. With that Bloons 3 is the most extensive part of the series so far and the game world is quite impressive. After its huge success online, it became only a matter of time until a new chapter had to be released by Ninja Kiwi. That was the beginning of the great success of the company and a huge fan base grew, which was soon decided into Bloon-supporters and Gemcraft-disciples. The advantage of Bloons is the easy gameplay which makes the game even playable for younger children as well as the sweet character-design. On the other side, in case you like high challenges better and a keen on having a high playing depth you're definitely better off with Gemcraft. At this current point both are facing each other with Bloons 4 / Bloons 4 Expansion Pack against Gemcraft Labyrinth. Let's hope, as Tower Defense Players, that both products will benefit from this competitive situation.

We wish you great fun with Bloons 3 Tower Defense! If you like it feel free to give us a Facebook-like or a Google+1 to help us keeping up the providing of TDs games online.

If you enjoyed playing Bloons 3 Tower Defense, please take the time to click the "Like" Button below. We use the Facebook Likes to generate our Game-Charts and the more Likes a game got, the higher it ranks.