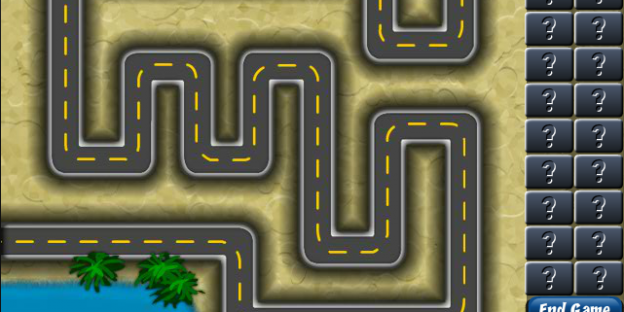 Bloons 4 is a great Tower Defense Game. Even in playing the free version you will have many, many hours of playing time and a whole lot of fun with it. The monkeys are back and the evil Bloons, those are balloons by the way, are trying to find a way over the map until no life remains for you. For all players who like Tower Defense Games the Bloons saga is a must-play. The game runs quite smoothly, but once you go above the provided levels even the best pc will reach its limits. The single missions are well designed and demand a lot of tactical knowledge.

A very detailed article (in german) is to be found on Literaturasyl.de:

The article should provide a less difficult start into the game and should help to get forward more quickly. It is very nice to see the series renewed constantly. New maps arise and also new towers are finding their way into the game. Bloons 4 is the second newest publishment by the company and while an expansion pack for Bloons 4 had been released lately everyone is just waiting for the fifth slice of the saga. Of course, the expansion pack can also be found on our page. For starters we strongly recommend to choose this one at first to get used to the towers in the game along with their advantages and weaknesses.

Graphics are nicely designed and seem to be very smooth. The first three titles were much more rough around the edges in comparison to this fourth slice. The tactical depth become a lot more demanding and also the extend of the units grew much bigger. Criticism is only suitable regarding the fact that a bit of money has to be spend on each map. Personally, I would have preferred a totally ad-financed way. But you can't get it all.

In our list of all Tower Defense Games, all the other parts of the saga can be found as well and of course they can also be played here for free. At this point, we wish you a nice TD playing session with Bloons Tower Defense 4. In case you like the game, our page or this article it would be awesome to get your support on social media. No matter whether you give us a Facebook-like, a Google+1 or a Twitter we will be equally thankful. A warm thank you at this point and now go for the Bloons!

My favourite in the Bloons saga. Good fun and many hours to get through.

If you enjoyed playing Bloons Tower Defense 4, please take the time to click the "Like" Button below. We use the Facebook Likes to generate our Game-Charts and the more Likes a game got, the higher it ranks.