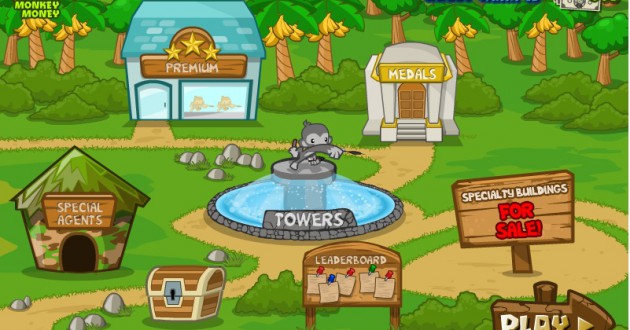 The cult series continues and now we are proud to present Bloons Tower Defense 5 to you. Ninjakiwi finally declassified the game and hence no tow hours later we have it here for you online! Blow all balloons into pieces with the monkeys. Don't let any of the evil bubbles wobble over the whole pitch unil the end. Among other things there are tiny heroes, daily updates, new tracks and many new defending towers. Bloons 5 RD is an incredible game and augurs long-lasting pleasure.

The game is played by mouse and you plant your defending towers right next to the tracks of the balloons. At first glance you only have simple monkeys at your disposal, but later on it is getting uber-brilliant, once you possess magicians, boats, planes and bigger guns. Therefore you need a bit of XP, which you can collect with each popped balloon.

In Bloons Tower Defense 5 money will be given for each played card. Therewith extraordinary buildings can be unlocked. Even heroes can be purchased but those can only be used once. Especially on the expert tracks and on the extreme ones later on you will definitely need some help already in the beginning. So, collected loads of money is a necessity. Every day, there is a special mission, which additionally helps you filling your wallet.

Each tower in Bloons 5 TD has two different ways of upgrading. While you can take on the first steps parallel, you will have to choose a certain direction subsequently. As a result, most cases will confront you with the decision whether you'd like to specialize in either mass destruction or extremely high damage on to one spot. According to the map you should take your decision situation-related and find a well-balanced blend.

As an advise: create a free account at Ninjakiwi nowadays to save your progression and be able to play Bloons 5 TD forever.

I play the Bloons Tower Defense 5 series from the day the series was born and now playing the fifth episode makes a superb impression to me. At first, I was a little bit disappointed because the game was only playable on the programmer's HP, but lucky us, those times are buried in history. Great graphics, the gameplay is awesome and the problem of too many Bloons on the screen became almost eliminated by now. I would like to say that this is an extraordinary good Tower Defense Game, that offers great fun for many, many hours. And now, dear apes, get out your dart arrows.

One of the best TD Games

If you enjoyed playing Bloons Tower Defense 5, please take the time to click the "Like" Button below. We use the Facebook Likes to generate our Game-Charts and the more Likes a game got, the higher it ranks.