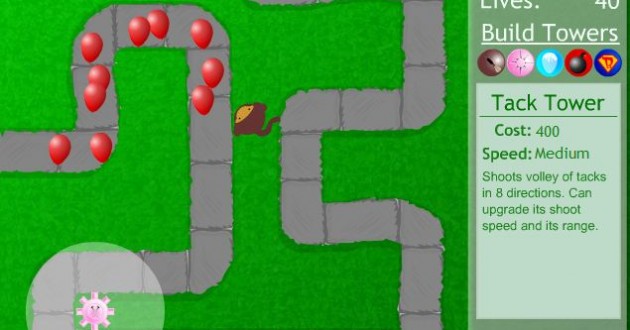 Bloons Tower Defense is the very popular first part of the whole series. There is only one map with few monkeys that serve the defending side. Still, it was the starting signal to a winning streak which set new standards in the Tower Defense genre. If the play the game nowadays, nostalgic feelings might appear and despite that the part is great fun still.

That one costs 250$ and throws a single arrow. Upgrades are available regarding reach and piercing darts which can strike two balloons at once. Clearly, a good start and even later in the game a good shot against single enemies.

It shoots randomly and doesn't aim at all. But on the other hand, eight at a time is quite a number. It's upgrades are higher reach and a higher shooting rate. Especially in tight bends this tower can tidy away in a superb manner and can disrupt the enemies lines in a delicate way. The 400$ are well spent here.

The only tower which doesn't let balloons blow and the price of not less than 850$ is quite heavy. Still, that one freezes all bloons in its proximity and wangles a longer period of time for the other towers to attack the opponents. Be aware that frozen balloons can only be blown up by bombs, so always combine this tower with a few bomb towers.

Expensive one - 900$. That tower shoots exploding bombs which are quite effective. Especially against huge mobs you can checkmate many of the enemies and in combination with the ice tower you can cause a lot of damage. The upgrades a worth the expense.

The god amongst monkeys, but very pricey at 4000$! That tower quakes the whole game, has a huge reach and a shooting frequency which is amazing.

Tactical wise, the lower left corner should be occupied by tack towers. Those towers do a lot of harm there. At the beginning of the track an ice tower would be great, especially teamed-up with two bomb towers. That way, the others apes can unfold their whole damage without losing shots onto frozen balloons. The rest comes naturally and after having it tried twice you should succeed.

In our list of all Tower Defense Games, you can also find the others parts of the series. Of course, those are to be played for free, too. Now, I wish great joy with Bloons Tower Defense, a true classic! In case you like the game or our page please don't hesitate and give us a Facebook-like a Google+1, a tweet or give us a link on your page to help us become more known across the net.

The first part. A true classic which should have been played.

If you enjoyed playing Bloons Tower Defense, please take the time to click the "Like" Button below. We use the Facebook Likes to generate our Game-Charts and the more Likes a game got, the higher it ranks.