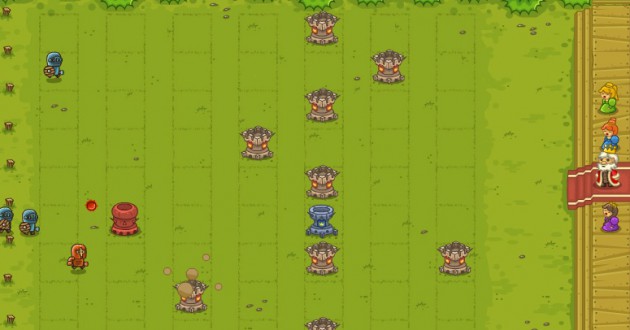 At Brave Knights the player slips into the role of an old wise king. In past times the King has been a brave knight himself but in the meantime he became a loving father with lots of beautiful princesses. With his daughter child's there are assorted knights who want to abduct a princess as a brave action. What does a loving father do in this case? He prepares his towers on the field of honor to stop the ecstatic knights. Brave knights is an entertaining TDG with a funny background story.

The game is played by mouse and your wrist is getting really challenged. As a gamer you are able to build 2 kinds of towers: either damagedealer or slowtower. The fallen enemies are dropping gold, magic potions and scrolls to increase your arsenal. A further problem is the short ammo. When your tower is completely out of ammo it vanishes and needs to be replaced. So you're very busy collecting things, putting special towers on the field and keeping an eye on collapsing towers. There are 200 knights you have to beat. According to the number of brave knights you beat down you can achieve some upgrades for your towers. In addition to that there are 15 special missions to earn further upgrade points. The goal is to stop the whole 200 knights of abducting a princess an keep them in the bosom of the family.

Brave Knights is colorful, entertaining and challenging. The story is funny and the upgrades are well conceived. It's a good variation to common and classic TDG. But finally there is nothing much to stay long and it's kind of depressing when towers constantly collapse und you need to rebuild them: Very funny story, good graphics, but an independent genre looks different.
all you do to my daughter, i'll do to you

If you enjoyed playing Brave Knights, please take the time to click the "Like" Button below. We use the Facebook Likes to generate our Game-Charts and the more Likes a game got, the higher it ranks.