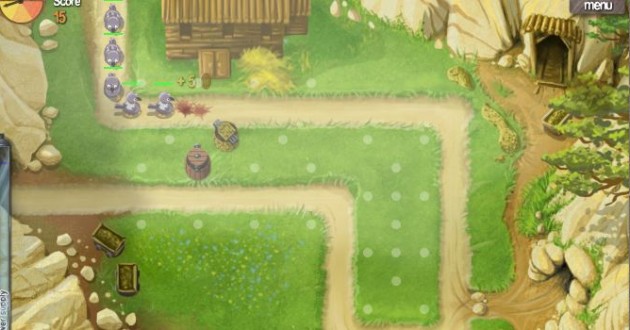 This Tower Defense is fun mainly because of its graphics. The game goes deep into detail and you can easily start basic and increase in difficulty at a decent pace. Unfortunately, not everything is perfect here, but more on that later. Claytus Hood Tower Defense is mainly the game for players who enjoy to see beautiful pictures and do not have the highest expectations from a game depth. Time after time, towers are to be unlocked and depending on the level towers can be upgraded differently.

The most important thing is the positioning of the towers. In between the levels you should always have a closer look on to the enemies. From mission two we strongly recommend to set up so called killing spots. Those are areas where the enemy can be taken into crossfire. On those spots tills can be established to receive 50% more gold.

There are two different difficulty levels and only three levels. A fourth mission is currently in production but it seems to take a while. Still, you should give it a try and play these three levels and dedicate your time to more epical TDGs afterwards.

Starts well, good game, but somehow doesn't make the impression of being totally finished yet, a little rough around the edges. If the producers would put a higher effort into the project Claytus Hood TD would have had the potential of becoming a true classic. But today, the game is more of an artwork piece without final touch. To give you a short clue about the pretty graphics, here's the screenshot. Wenn die Macher.

Sad that there is not more to play

If you enjoyed playing Claytus Hood Tower Defense, please take the time to click the "Like" Button below. We use the Facebook Likes to generate our Game-Charts and the more Likes a game got, the higher it ranks.