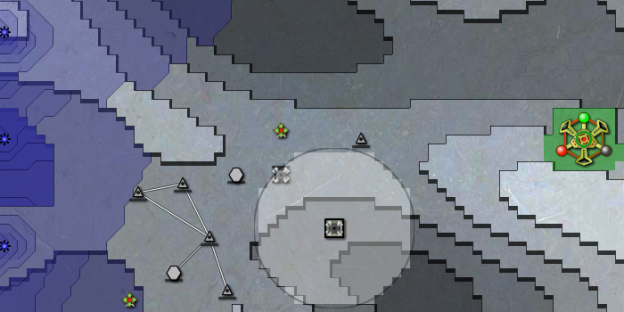 Creeper World is back and has something unique on offer: every day you will find a new map that you can play on.According to the producers that counts from now on until the end of time. Creeper World id a fantastic Tower Defense Game, in which you have to defend yourself against extraterrestrial spores and in which no determined paths exist.If you don't know the game you should probably play the tutorial of its prequel first. Of course, the instructions do help as well as simply playing it. Creeper World Evermore now with daily updates.

You defend your base against evil extraterrestrial spores with the help of several towers and energy suppliers. The spores have no determined paths, instead they swarm out from the top to the bottom and from there into all possible directions. You can say, you basically protect your fixed position. At the same time, your building material and ammunition is your energy. That means, that if you build up your base too quickly you will run out of power later on. Only a balanced build-up will lead you to your goal and that is always to link other areas towards yours.

As a matter of course, all different Tower Defense Games can be found in our TD gaming list here on our page. Unfortunately, it is not really possible to give hints and tricks regarding the maps since every day new maps appear. Generally spoken, you should always try to expand as soon as possible in Creeper World and try to produce as much energy as you can. Then you have to try to block the first attack wave against yourself and go for expansion after you've survived that. Take care of yourself especially when air units are attacking.

Creeper World has always been one of the innovative Tower Defense Games. Graphics require getting used to it but since you don't only play the game for five minutes that won't be a problem. The game is great and every real Tower Defense player will have a determined goal every single day. A new map on a daily base is a great idea and that way Creeper World Evermore remains a constant quest. If we had more than two thumbs we'd lift them all!
New maps daily in a good Tower Defense Game. Thumbs up!

If you enjoyed playing Creeper World Evermore, please take the time to click the "Like" Button below. We use the Facebook Likes to generate our Game-Charts and the more Likes a game got, the higher it ranks.