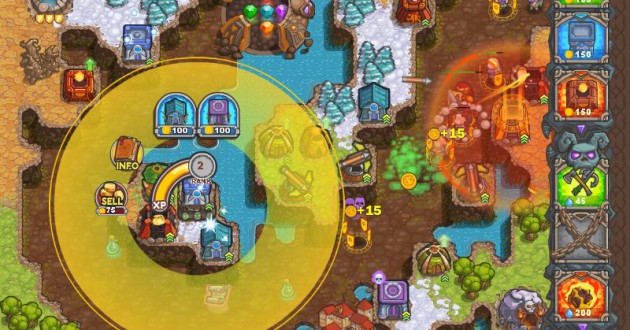 The game is mostly played by mouse, although a couple of hotkeys are quite helpful. Hotkeys as listed as below:

Altogether you can reach the maximum level of 51, play 21 maps and unlock 50 achievements. If you play those maps in the dark world as well quantity even doubles. Next to the regular experience points that comes with missions an extra XP-Bonus from unlocked badges is included. To earn all 50 achievements, it is required to be a very skilled tactician and experienced player. Especially the last pirate ship is a bit of a handful and it happens on any number of occasions that a gem gets stolen.

Irvysoft has finally shown a bit of compassion and has taken out the boss-ninja. That guy has driven not only me to desperation and so Cursed Treasure 2 is much more fluently to be played. As an advice it is handy to concentrate the fire to the beginning and the end of the route. The new enemies with their smoke clouds, charm and diving equipment keep the player always on the go.

Playing the first maps I was slightly undecided. Of course, everything was more colourful and the graphics was better: new enemies, new locations, and new quests. In all it is a dignified sequel. After played those 21 maps you wish there were more of them, but there is still the hunt for badges. That is why we give Cursed Treasure 2 the full rating. Looking at the enormous size of the outline map i wonder if there couldn't be a chance of an update any time soon. The right side: Last Sea seems to be too large and empty as if more levels would not fit in there.
Thank god there is no more ninja-boss

If you enjoyed playing Cursed Treasure 2, please take the time to click the "Like" Button below. We use the Facebook Likes to generate our Game-Charts and the more Likes a game got, the higher it ranks.