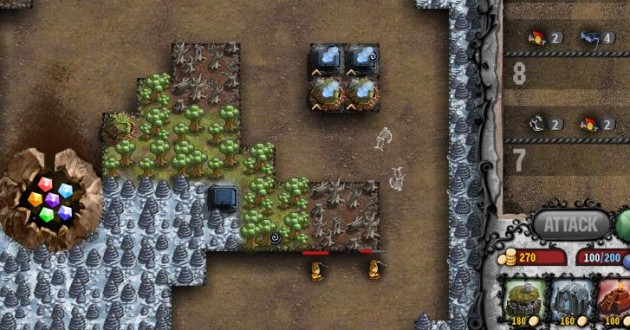 Cursed Treasure is a nice Tower Defense Game. There are several levels which can be unlocked by playing. While doing so, your earned points can be distributed on different things to get them improved.

Essentially, there are three basic towers in Cursed Treasure, which all collect their own experience points and can be improved later on. All this doesn't follow a linear way. Rather has the player to decide which way the tower should pursue.

The graphics of Cursed Treasure are quite nice and the gameplay is simply awesome. I would say that Cursed Treasure is probably one of the best Tower Defense Games at the moment and, of course, free for you.

In the game monster are moving on a linear pathway and are trying, one after the other, to steal all gems out of the nidus. Since the monsters are transporting the gems along the way back the gems aren't lost already once a monster touches them. Additionally, you can select that gems that had been transported will return to the nidus after a while. Above all enemies, their bosses are quite tough to face since their hit points can be enormous and can cater for a lot of trouble. Should there be no remaining gem in the end of the game you lose it. But still, there is the possibility to retry each level and saving up points that way.

I have to say that Cursed Treasure gets the full amount of points. Good gameplay, great graphics and once in a while a really tough difficulty level. The only thing I do not love is the lack of missions.

Not much to say against Cursed Treasure

If you enjoyed playing Cursed Treasure, please take the time to click the "Like" Button below. We use the Facebook Likes to generate our Game-Charts and the more Likes a game got, the higher it ranks.