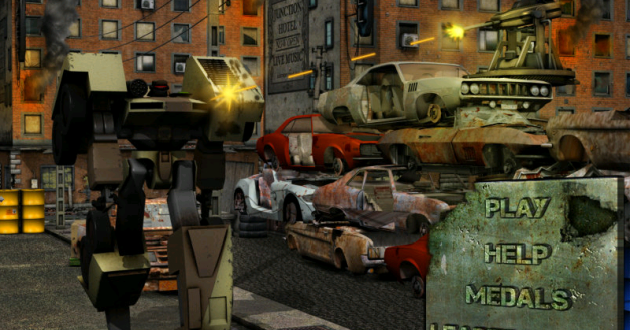 This game is a basic Tower Defense. The player possesses eight different towers and a mine unit. The goal is to maintain resistance against modern weapons of war and avoid, as usual, crossings of units athwart the pitch. The enemies are divided into two different groups, ground- and aerial-units. The flying enemies are able to traverse own rows of towers, still they might have to eschew already placed obstacles conceivably.

The towers are to be placed via simple clicking and a second click on the map. By clicking once more on an already set tower that one can be upgraded. Every tower can be leveled up twice. The mines can be put down directly into the paths, however, their damage rate is limited and a one time thing. You should probably back away from that strategy in case you wish to reach the end of the map. Against aerial-units strategically important positions are necessary on which air-towers are to be positioned. Moreover, you should use towers within air ducts. Those towers should be qualified to fight both, aerial- and ground-units.

Be advised, it's clever to build up bigger towers at the back since those are fitted with a high range and can fire onto the created labyrinth constantly.

At first sight, Defending Paradies seems to be a little confusing. You got to choose the map, click onto it once more and not until that the game is going to begin. Then, there is the problem that you are forced to create a labyrinth but it's totally unclear where the monsters are going to run later on. It is a lot about try and error until you've found your way. The graphics are ok, although the units sound to be put on. The gameplay is poor to dreadful and there's no speed button. Additionally, you're not able to see how many waves are pending. Sadly, Defending Paradies belongs to the poor TD Games and personally, I did not put much effort into playing it for long. Hopefully, you like our honesty and still give us a Facebook-like, a Google+1, a Tweet or a link from the own page. Of course, you can also skip this one and move on to a better TD Game here.

Quite decent, little confusing at first

If you enjoyed playing Defending Paradies, please take the time to click the "Like" Button below. We use the Facebook Likes to generate our Game-Charts and the more Likes a game got, the higher it ranks.