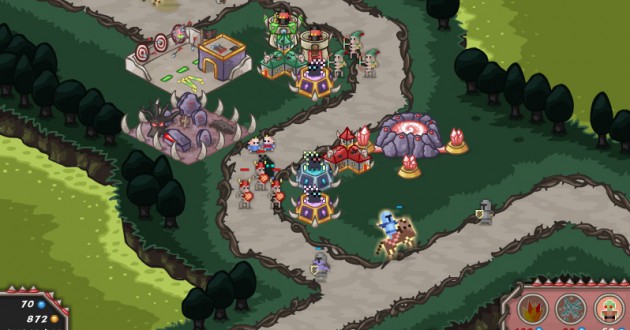 Description of Demons vs Fairyland

Demons vs Fairyland is the next Tower Defense hit from Armorgames. According to own statements they have put together all the best features from Gemcraft, Cursed Treasure and Demon Rush and so incredible Demons vs Fairyland came to light. An epic Tower Defense Game, in which you undertake the task of leading the dark side into battle. To be more precisely, you play the demons after they have kidnapped a few kids. The good fairys are now trying to approach you willing to free those kids. Can you protect your gentry from shellacking and ensure that the kidnapped ones remain within your realm?

The game is actually played by mouse. At first, there are three fundamental units: melee, archers and magicians. Those can be upgraded and specialized later on. To bring those units and the towers into position on the wayside, you will need the suitable builder's yard which takes quite a lot of space on your map. As you can see, tactical thoughts are necessary even though the first attack wave by the creeps hasn't even started yet.

With each level your own arsenal grows and the fairys perpetually come up with something new. At the end of the day, you possess a huge selection of level up possibilities, an awesome skill tree and a marvelous gameplay which will instantly bring you under its charm.

Since it becomes arduous to master eventual levels without rerunning older ones that option subsists naturally. It is wise to work a lot with magic by experience.

Tips and walkthrough Demons vs Fairyland

There are a few tricks that can be used in Demons vs Fairyland and that can help you regarding a quicker walkthrough. For instance, you should assure that the skeletons are always involved in a fight. Those buggers constantly steel money from your enemy in exchange for little life power. This is elementary, because you can always improve your towers with that money.

The magicians have mass destruction and later on in the game the damage ability per kill rises. As a result, it is very important to hit the enemy in total. The best option is to combine that skill with melee units like skeletons who in turn are able to diffract the fire on one exact spot.

The archers are vital for flying objects, which will appear eventually in the game. They can eliminate single opponents with poison or slow down the masses as an ice tower.

The Tower Defense Game Demons vs Fairyland is a real classic and is delivering fun over and over, again. The playing time is epic and even if the graphics could have been better the game world still looks well and affectionately designed. Personally, I pull off my hat in front of the coders. A real classic and awesome Tower Defense Game, AI well made and heaps of fun!

If you enjoyed playing Demons vs Fairyland, please take the time to click the "Like" Button below. We use the Facebook Likes to generate our Game-Charts and the more Likes a game got, the higher it ranks.

Comments on Demons vs Fairyland