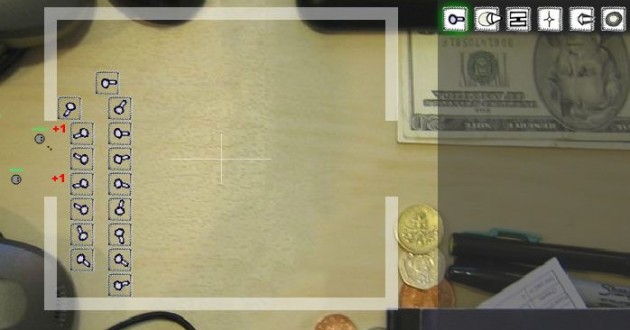 Desktop Tower Defense is that game with which all the TD-hype in the net started with. Tiny monsters run across a desk and try to fully cross it. With the help of some towers you can stop them. The track is to be constructed by yourself and your freedom in doing it is very high. Therefore you could really regard yourself as a professional labyrinth builder. Desktop Tower Defense captivates by its simplicity and its great gameplay. In later modes there will be more entrances, the monsters become easier to kill and you'll start to work up a sweat for sure.

The pellet tower is the most basic one in the game. That one is mainly used to build the labyrinth and the tracks. Its advantages sit in the simple fact that it is cheap, shoots against ground units as well as air units and at its highest expansion stage its shooting range combined with its damage rate is impressive.

The squirt tower has a high shooting range and is very effective. The range is high enough so that the tower can shoot above the next row of towers right from the start already and therefore seizes the track twice. Unfortunately the last upgrade of its is very pricy bit has a huge damage rate in return. Especially against the end bosses the squirt tower is a good choice.

The rocket tower in Desktop Tower Defense. That one possesses a high damage range and rate. Its shooting frequency is low. It is a good one against schools of monsters even though it can not fight aerial units.

Ground-Aerial-tower. That tower can shoot off four rockets at a time and is the only true weapon against flying units. Sadly, it doesn't work at all against ground units and so you should use it economically. Still it is always wise to have one or two swarm towers on hand, preferably in the middle of the map.

The Bash tower damages all troops anywhere near. Particularly in a fast game the bash tower is great since it quickly swipes the enemies life points. Its special skill is to freeze the enemy for a short period of time. The chance to do that rises with each level. Frozen opponents are going to be dragged apart and receive another shot from the quake tower.

That one is there to slow dien the enemy. Unfortunately its damage rate is very low. It is best to use the frost tower in crowded places.

Desktop Tower Defense is a real classic. Especially the different difficulty levels and the clean programming lets it looks very nice even after a couple of years have passed by since it had been released. Graphics are nice, the sound is good, even if the death of a monster can be annoying. At this point I have to pass a compliment to the programmers of Desktop Tower Defense, who even nowadays update the game on a regular basis. If you like the page, the game or the article please let us know by a Facebook-like, a Google+1 or, even better,c a link to us on your page. That way we will become easier to be found in future. Thanks a lot and now have great fun with Desktop Tower Defense!

You simply have to honor Desktop Tower Defense

If you enjoyed playing Desktop Tower Defense, please take the time to click the "Like" Button below. We use the Facebook Likes to generate our Game-Charts and the more Likes a game got, the higher it ranks.