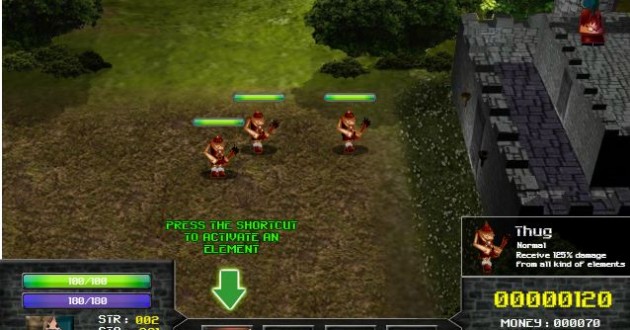 Castles were built to be defended and this is exactly your job in Dominion. Shoot down from the walls of your castle and hit as many opponents as before they reach your fortress. The first missions are quite simple to master. But you should try as many things as you can since here the foundation of Dominion is laid. You can attack with numerous elements, can level up your character and purchase troops for your walls. Only if you choose wisely you will get far.

Fundamentally there are four elements, which you can unlock time after time. You can attack with those and cast three different spells. Attack, Attacking speed and magical power can be upgraded. You earn money through enemy kills. Very nice hereby is the fact that your purchased warriors can get level ups as well.

You can shot by pressing the left mouse button. In addition, you should use your other hand for using the keyboard in order to choose amongst your magic spells and the kind of attack you want to use. Stamina is from major importance because every single attack requires some of it. If you run out of it you'll have to wait for a couple of seconds until it is filled up again.

Basically, the idea of play is a good one and it is worth spending a good amount of time with it. There is only a little problem since the castle cannot be repaired. So, you fight in each level and survive and after a while it just isn't enough anymore since your castle gets blown up. That makes you start from scratch over and over again and the gameplay does not seem to be totally thought through. All that makes Dominion an only average Defense Game in which most of you will surely lose fun after a while. Still, it would be nice to receive a Google+1, Facebook-like or Twitter mention!.

Here is a little gameplay video of the first mission to get an idea of Dominion.

If you enjoyed playing Dominion, please take the time to click the "Like" Button below. We use the Facebook Likes to generate our Game-Charts and the more Likes a game got, the higher it ranks.