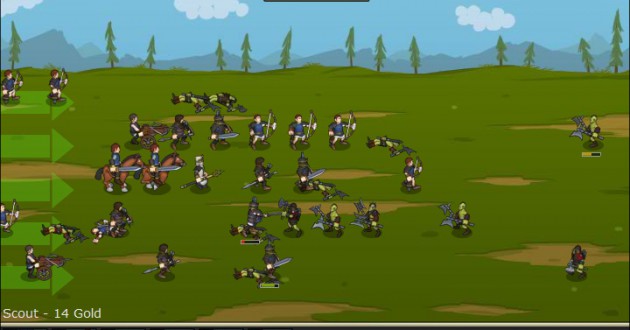 Orks, pirates and a strange blue fish tribe infest the island of Arkeia. Are you man enough to strike back with your brigade and free the kingdom of the island? Gather your troops, research new fighting techniques and face war on the field of glory. Empires of Arkeia is a truthfully wonderful Defense Game, where many things are waiting to be discovered.

The game is best played by mouse and keyboard likewise. With the number buttons 1-6 you can choose amongst your different units. At the same time you can send those units into battle unsung the arrow keys on your keyboard. In the upper corners you can see the current life energy and once you've sent enough troops into battle you've won the round. Now you earn XP, which result out of your own strength, losses and actual played time. If you play an island more than once, you get a small malus, but still, the XP points sum up. If you have beaten up enough opponents, you can see the words "sent wave" popping up and you are qualified to send out from a certain unit for free for a specific time period. Between the battles you can put your effort into researches or rearrange your army. Under "barracks" you can find your battle units and while you keep playing more different kinds of fighters appear. But be aware of the fact, that only six of them can be taken into battle at once, so choose them wisely.

Under "academy" you'll find the research menu, where you can use your XP to improve the units. Again, you should properly think about your decisions since you understandingly want to improve your units on the one hand but on the other hand you also have to consider to tap new possibilities or units.

Under "library" you'll find the description of all the known enemies. It is important to have a look into that index to study your enemy including his strengths and weaknesses.

Empires of Arkeia is a genuinely pleasant Defense Game, which is rather challenging. Its graphics are fine and the troops are designed affectionately. The gameplay is alright, even though ending out units by using arrow keys isn't exactly that elegant. Especially well coded is the library which tells you a lot of details regarding the enemies unit. That adds a lot of flair to the game. Empires of Arkeia is a must play for every Defense Game sympathizer.

Great Defense Game. I loved it!

If you enjoyed playing Empires of Arkeia - Defense Game, please take the time to click the "Like" Button below. We use the Facebook Likes to generate our Game-Charts and the more Likes a game got, the higher it ranks.