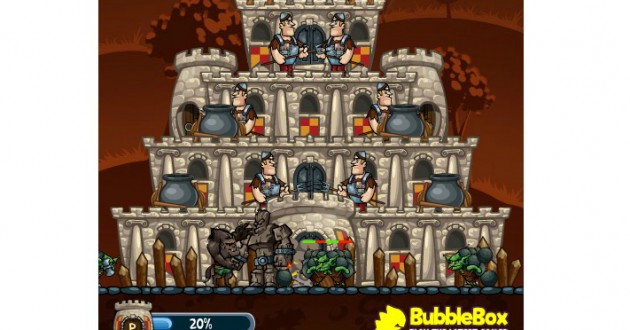 Epic Stand is a well constructed Defense Game with a huge share of strategy. You are a wizard and you have to defend your tower against mobs of monsters. The attacking creeps have to find their way over single lowlands towards you. Defend yourself with magical spells, units and a well equipped tower. In the end you can even achieve the triumph yourself in this Defense Game.

Your goal is to see off the attacks at an early stage even if you only possess one spell at start. If you succeed in that, you can collect skulls each round, for which you can expand your skills in return. Each round a maximum of three skulls can be rewarded but for getting them your tower must remain untouched by the enemy. An additional skull is possible to obtain once you survived the hardcore mode. Be advised to replay early stages to collect all possible bonuses in here to build up a stronger defense. Later in the game, your army is quite thin and therefore, not exactly the biggest help. If you'd like to kick it in the high gear in the beginning of the game already, choose the survival mode immediately.

Epic Stand is an extremely funny game, which pays attention to good reactions with the mous and a tactical build-up play above all. The graphics are great and humorous animated. The gameplay is well balanced and you can always reach out one step further. It is also nice to see new opponents appear after each round. Epic Stand is good work and you should definitely play it at last once in total.

As a special hint, you can unlock an additional level of the tower. That way, you don't have to stop the enemies on the ground already. Have good fin with Epic Stand.

I wish I only had 10% more mana in battles

If you enjoyed playing Epic Stand, please take the time to click the "Like" Button below. We use the Facebook Likes to generate our Game-Charts and the more Likes a game got, the higher it ranks.