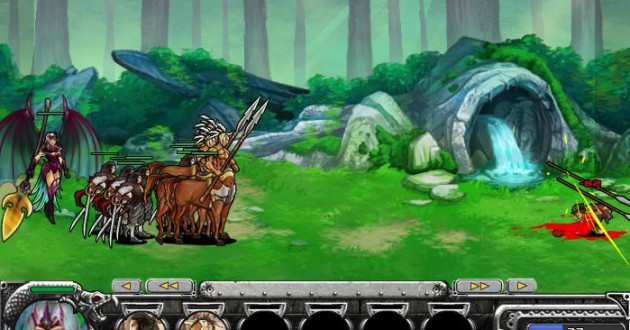 The fifth part of Epic is a really good one, again. Here, you can show how good you actually are in Defense Games. Amongst others, you play a hero, up to 30 different troops and items. Time after time you are lead into battle. Of course, you can upgrade your units and improve their skills and stats. An awesome Defense Game, in which you will even find some elements of TDG.

At first, you set up your army and storm onto the first battle. Under "formation" you can select your troops, upgrade them and equip them. For each won fight you receive a reward and can dedicate yourself to higher challenges.

In battle you can either select your units via number pad or with your cursor. Those units can be brought into a certain direction or to make use of their special skills, if they already possess them. The hero is also to seen as a unit with that you can strive for victory. If the hero dies you lose the round, so always take good care or your life bar.

As an advice, let me mention the long rage units. Those units are very good for damage and for entice away enemies units. So, the game should probably be a little easier, although to the end it will become quite tricky in Epic War 5.

Good graphics, appealing sound and the game difficulty increases step by step. Actually, there is nothing to say against Epic War 5 and considering the fact, it is a Defense Game, it is well made. Especially good is the level tree for the single units and in the middle of the game you should really keep an eye on the units you carry with you. Surely, it can happen that you will have to retry the one or the other map but that just goes with the territory. Playing Epic War 5 you won't do anything wrong. It would be nice if you were so kind and gave us a Facebook-like or a Google+1. Even better would be a Twitter-link or one of your own blog. Thanks for that and now have great fun with Epic War 5!
Very nice Defense-Game. A bit more playing depth would have been good

If you enjoyed playing Epic War 5, please take the time to click the "Like" Button below. We use the Facebook Likes to generate our Game-Charts and the more Likes a game got, the higher it ranks.