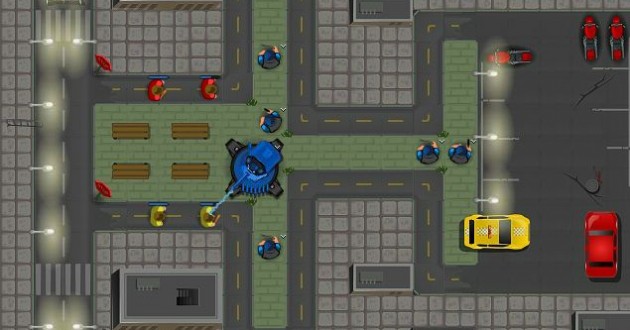 A really interesting story on which the game Football Defans is based. You play the stadium police and have to try to prevent the opponents supporters to attack yours. Therefore, several units are under your control. Injured fans can be healed by the ambulance. Basically, all that seems to be a normal Tower Defense Game which always offers two different pathways on which the hooligans can move along. In the middle both factions meet on a parking space for battle. Additionally, every fan possesses two life bars, one for police defense and one for life energy. Once the bar for the police is used up the bad guy turns around and doesn't seem to have an interest anymore in taking part in the fight. Rubber truncheons, rubber bullets and water guns are the best friends of the player. Interesting, the lives of the player depend on the the lives of the fans who you are actually fighting against.

You should take good care to place your units with a long range at the parking space. Here, units, that are in battle right at the moment, can be attacked directly and being forced to turn around immediately before they'll die. You should also start your attack waves at an early stage so that you receive more money. This is important for your troops set up. Upgrading your units holds another advantages since you will be able to specialize in certain talents later on.

Between the missions you should level up your skills regularly, because otherwise you will run out of funds sooner that you might think.

Personally to me, a very positive Tower Defense Game, because usually you are defending your castle, house, country or something similar. Here in this game you are protecting or trying to protect your rivals supporters. Graphics are neat, the sound is getting a little annoying after a while. The storyline is quite convincing and the gameplay knows how to convince. Several paths at the same time and the huge upgrade menu will also satisfy the TD player. Moreover, the difficulty level is rising at a high speed and personally, I like it that way.

If you like the game, too or our page, please give us a Facebook-like, Google+1 or a link of your own homepage. You will find us much easier that way and we will get to be known a little bit better. So, go for it now and get out your rubber truncheons!

If you enjoyed playing Football Defans, please take the time to click the "Like" Button below. We use the Facebook Likes to generate our Game-Charts and the more Likes a game got, the higher it ranks.