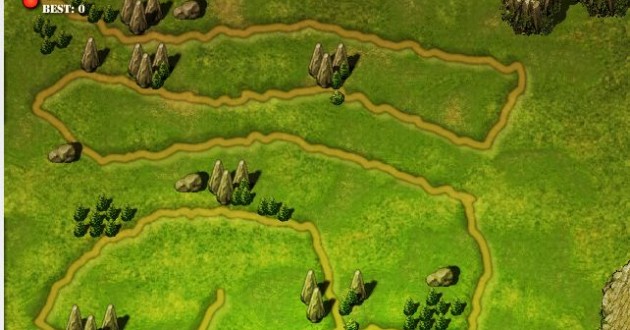 Frontline Defense, subtitle First Assault, is quite a reliable Tower Defense Game that especially convinces with its graphic and its playability. It is placed in the military section and you have to defend different paths with towers. The attacker has different forces to attack. That way you can defend yourself against infantry, motorized units and armors. Each level can be played in three severities, so you can already have a lot of fun with Frontline Defense until you get to know the game better.

Actually there's not much to tell. It works like most of the other TDG. Just the different amplifier are a little speciality in this game. Maybe it seems to be a little to difficult for some players at the beginning, but there certainly is a trick with which you can handle the game easily.

Once you have won a lap, you receive a score for it and you also get feature points. Those can be used to improve your troops power in a fight. I don't want to send the kind visitors into the game without a hint. So it's better to rely on towers that cause a high damage. Later you need to expand those towers. It is not very helpful to have many little towers in your game. For each improvement of a tower you achieve a fire power, can shoot faster and especially at a higher range.

This game almost belongs to classics, although it doesn't impose requirements on true TD fans. It works very good, you can fast-forward more faster and the shoots are also counted by time. The constant build-up in the first lap is a little boring, because it always goes after the same sketch. Later on you can act out on certain maps. This game doesn't earn the high score since it's too simple, but you can conclude that it's a good game for starters or to shortly play here and there. It isn't epic, but you should at least play the hardest level once. Enjoy the game and do not forget to give us your vote on Google or Facebook.

Solid, but on the long run a little to easy.

If you enjoyed playing Frontline Defense, please take the time to click the "Like" Button below. We use the Facebook Likes to generate our Game-Charts and the more Likes a game got, the higher it ranks.