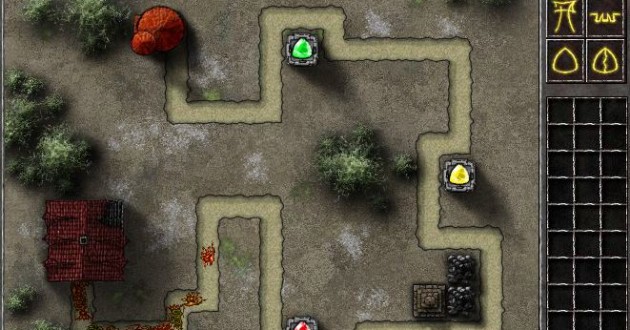 Gemraft Chapter 0 is the second part of the Gemcraft series and the producers have done a brilliant job here in creating a very special gaming experience. By the way, the full name of the game is Gemcraft Chapter Zero - Gem of Eternity. Newly added in this part is a different general map, many alternative paths and even more game modes for Gemcraft. Wr are pleased that Amorgames released the Game for all and made it possible for us to provide here on our page.

Again, you are playing as a wizard, who has to protect his tower against evil forces. In addition to that, you can use different gems with magical powers, combine those and stop the monster that way.

You equip your towers with gems, which then open fire on the monsters. Additionally, there are traps which can be placed alongside the way and out of which special effects and damage is emitted against the creeps. The difference only lies in the power of the attack. Using traps will result in only little damage but a higher special effect rate instead.

Between the single missions you can purchase certain skills for your magician using your XP. For instance, you can buy more effective gems or cheaper towers, traps or mana. Mana is very important in this game, since in can never reach a zero amount. If it does, your wizard dies. For each kill you urn additional mana and apart from that you also have something like an unconditional basic income. On the other hand you spend a lot of mana by the time in favor of building materials for the towers and the gems.

A pretty good characterization of all gems as well as tactics can be found in this article (german): Gemcraft Chapter 0 Cheats, Tipps und Tricks

I recommend everyone, to simply try the game and only after that look for hints and tricks for Gemcraft Chapter Zero. You basically will have more fun that way.

The next part of Gemcraft can be played right here on our page, as well. It is called Gemcraft Labyrinth.

Good and worthy sequel to Gemcraft

If you enjoyed playing Gemcraft Chapter 0, please take the time to click the "Like" Button below. We use the Facebook Likes to generate our Game-Charts and the more Likes a game got, the higher it ranks.