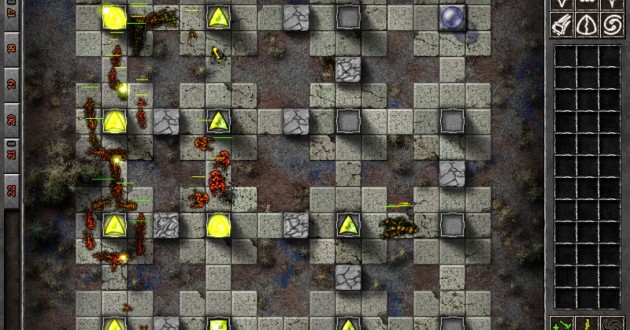 Gemcraft Labyrinth is the next big hit regarding the Tower Defense series made by GameinaBottle in the net. Gemcraft is one of the two big players in the TD genre. That is beyond debate. Together with Bloons Gemcraft is fighting the battle for the crown. The third part of the Sage named Labyrinth is now taking the player to a huge areal with uncountable levels, skills and tower variations. In Gemcraft you set up a tower which is only the substructure for the actual weapon. Here, the gems come into play. Those stones are combinable as you like and therefore, all kinds of different weapons are constructable. That leads to a whole lot of individual weapons.

The currency in Gemcraft is called mana and you get several buildings and gems for it in return. Likewise, mana illustrates the life energy of the player. Once it drops below zero you lose the game. To minimize the frustration level you have three saving lots which are overwritten automatically after each round.

If you like you can unlock an additional premium account and cause a sensation. Additional skills which are extremely powerful are very useful and a great support. Real Tower Defense player instead should try to finish the game without any help.

In case you wish to read an instruction for Gemcraft or need a little help you're more than welcome to read the following article (in german language): Gemcraft Labyrinth Anleitung On that page you can find a save game which can easily be included in your version of Gemcraft. That'll spare you some time and hassle.

The build-up in Gemcraft Labyrinth is of great importance. Try to create long path ways for the monsters so that they can be attacked several times. Surely, many strategical ways will lead to success and especially the first levels aren't that difficult. Moreover, many possible ways to attack the monsters do exist. The classical way is the one using towers. This way most damage is caused. Another way is to use traps which are to be placed along the way and loaded with gems. Those traps cause less damage but are still very useful because of their special skills. By doing so, additional mana can be earned. Gemcraft Labyrinth also offers the possibility of using altars, so called shrines. Those shrines also cause damage by sacrificing gems.

According to the quality you play, more or less points are to be won. Those points improve your players level. For each new level you receive skill points with which you can extend your own abilities. The points are calculated by the amount of monsters that you have killed and several achievements that are to be won on the map. So, more monsters can be invoked, more towers can be erected and waves can be called earlier and more often, e.g..

Gemcraft Labyrinth is the most complex Tower Defense Game by far, which is free to play. The playing durance is about 20 hours, if you're really quick. Partly, it is sort of annoying to play earlier levels more than once to reach higher points. Although additional game modes are there which rise the amount of points and therefore they are very helpful for the player. The following video shows how to make a whole lot of points in a single mission:

How to cause extreme damage is shown in the next video. Here, a high-damage-gem is built which is used against humongous monster waves and does it work solidly. The video shows the art of play on field D4 by way of example.

Gemcraft - both thumbs up for this epic TDG

If you enjoyed playing Gemcraft Labyrinth, please take the time to click the "Like" Button below. We use the Facebook Likes to generate our Game-Charts and the more Likes a game got, the higher it ranks.