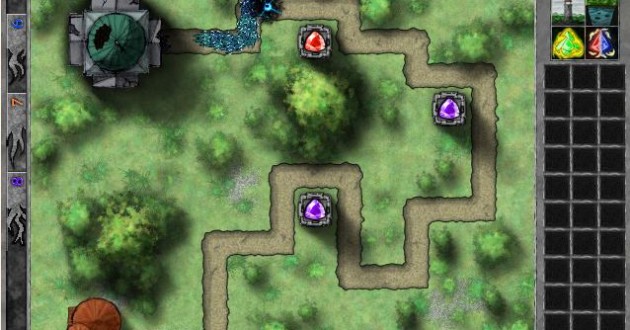 Gemcraft is the forefather of the series and now we are more than proud to present it to you. Not anymore only available on US servers, now declassified by our friends at Amorgames. Gemcraft is an epic Tower Defense Game, which distinguishes itself through a lot of tactics, a good gameplay and long lasting groove.

At Gemcraft you play a wizard, who tries to defend hin own tower. All kinds of evil animals are running towards you and you habe to try and stop them out of your own little tower. For doing so, you have to place several of those towers along the wayside and equip them with gems. Those gems are unrestrictedly combinable, they can be upgraded and cater for a sufficient shooting power. Every colour of the gems possesses a different unique special ability and all the time you will find out new combinations. In addition to that there is an incredible skill tree in the game, in which you are proficient to get yourself special talents.

On the huge world map many smaller maps are hidden which you will only unlock once you've mastered the previous ones perfectly. In the end it all comes down to and end fight, where it becomes absolutely necessary to show everything you've been taught beforehand.

Above all, you should try to set up a certain tactical formation quickly, which guarantees a lot of offensive power. Moreover, mana gems are pretty useful since through that you can generate extra power quickly and you might be able to turn a game around.

Gemcraft is one of the best free-to play Tower Defense Games that exist so far. Nice storyline, good gameplay and above all, you are basically qualified to manifest the difficulty of your game yourself. The graphics are alright and the sound is ambitious. First and foremost it is the amount of possibilities that you have in Gemcraft which makes the game an overwhelming one. Both thumbs up for Gemcraft, even two further versions have been released meanwhile, which, of course, are waiting to be played on defense-tower.de.

Gemcraft Labyrinth is the most recent part of the series at this juncture and of course it is available on defense-tower.de as well. If you like to play Gemcraft you can either search in the Tower Defense game list or click directly on the following link:

We wish you great fun with Gemcraft!

A major classic which hasn't lost any of its charisma

If you enjoyed playing Gemcraft, please take the time to click the "Like" Button below. We use the Facebook Likes to generate our Game-Charts and the more Likes a game got, the higher it ranks.