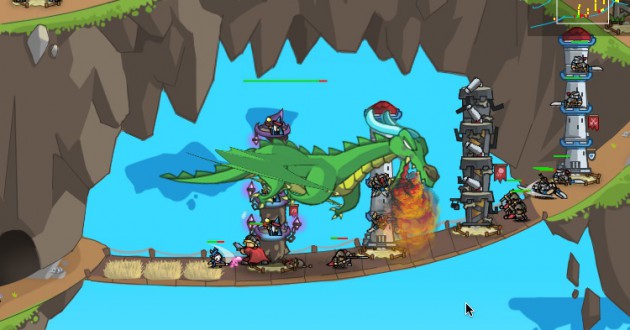 Description of Giants and Dwarves TD

Giants and Dwarves TD is a fine TDG launched by Kongreate. You act as the king of the dwarfs, whose land is being threatened by giants. Your troops are counterposing the enemies on guard. There is an additional Hero, who can encroach into the battle. Fight for the freedom of the dwarfs and disperse the enemy out of your lands. This game is played in many exciting missions. Chose your upgrading - tactics wisely. Even if this game seems easy at the beginning, it's getting very difficult at all events.

Raise your towers There are building pits along the way, where you can raise your towers. You should chose an early tactics to be prepared for the further complexity of the game. At the beginning there are only 2 towers available. You can chose between soldiers, archers, mage and canon towers later on. They differ in range and can act against enemies in several ways. You should chose mage in the late game, it's the only way to kill ghosts. In between the missions your troops and skills can be improved by clicking the hammer on your screen. Some things are getting cheaper and your damage will increase. You will upgrading-points for finishing your missions. Besides, spells against giants will be very useful later on.

A great Tower Defense Game. It's getting pretty tight afterwards, so you should chose a good tactic from the beginning. A lead at this point: Look at the weaknesses of your enemies and adapt your towers to that. There are Hero - fights, who are animated in a smashing way. The upgrading tree is diversified and music is fitting in. A small downer are some premium levels, you can buy. But all in all Giants and Dwarves TD is getting full marks.
Die Heldenkämpfe gegen die Giganten haben mein Herz im Sturm erobert

If you enjoyed playing Giants and Dwarves TD, please take the time to click the "Like" Button below. We use the Facebook Likes to generate our Game-Charts and the more Likes a game got, the higher it ranks.

Comments on Giants and Dwarves TD