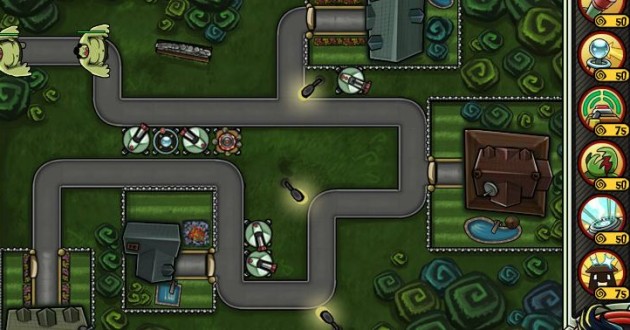 Here, it is getting a bit tricky, but don't worry, the game is honestly very joyful once you've conceived it. Thus, you play a village and the zombies are moving towards you in waves and therefore across the streets of the village. Meanwhile the door of a house is always open and since the opponents are stupid they try to run in there, of course. This means that more than one target exists for the zombie and if they once reach one of the houses and even make it to enter it, the house will be immediately be destroyed. If you lose all your houses the game will be lost for you in general. By dexterously opening and shutting of the doors you can steer the zombies through the streets. However, this doesn't work forever since more and more zombies of the next waves are walking on the streets and somewhere they will hit for sure.

At the same time ghosts are flying over the battlefield all the time. The ghosts also try to get into the houses but not by using open doors but rather by wandering towards their goals. Once they reach a house they'll kill its inhabitants. If you run out of villagers you lose. So, to prevent that blast those ghosts, too.

Principally there are three towers at disposal which are upgradable and able to get a specialization from level 3 onwards. Moreover, there are traps for zombies and ghosts which can be put on the houses. However, those are not actively involved in the battle itself. Eventually, there is an emergency kit with which an infested house can be purified.

Haunted Suburb is a great new Tower Defense Game which provides much fun. While the battle is taking place you'll be quite busy and you have to make sure to steer the zombies to where you want to to go, purchase upgrades regularly and not to lose your houses. Anyhow, if you lose one the pathways will change immediately and you'll have to react very quickly to keep up your defense. The graphics are superb, the sound suits the game very well and the upgrades for the towers are well conceived. I appraise the full amount of possible points here, only a few more levels would have been nicer.

If you like the gam as well, please give us a Facebook-like or a Google+1. That way we will become more popular and even more people are going to play Haunted Suburb. Thanks for your visit and now enjoy the game! Tower Defense forever!

If you enjoyed playing Haunted Suburb, please take the time to click the "Like" Button below. We use the Facebook Likes to generate our Game-Charts and the more Likes a game got, the higher it ranks.