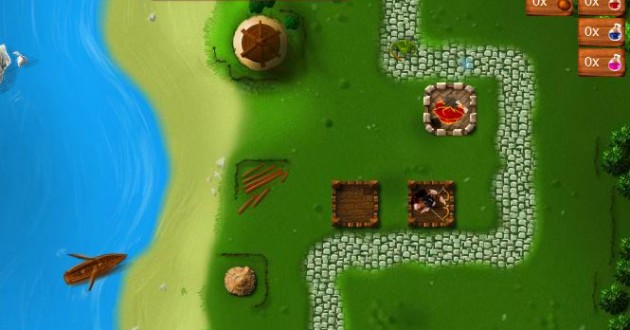 Description of Heroes of Mangara

Do you know what starts off poor and develops into and awesome, great Tower Defense Game? Exactly. It is Tower Defense Heroes of Mangara. Graphics are fine and for starters it quite easy. In addition, there are some levels, heroes, a skill system and more magical spells. Moreover, the mission goals are pretty rich in variety. There are not so many different troops, but the game is simply conceptualized in a way that you are always about to press the pause button since you really have to think about what your next step will be. The first four missions are also made for beginners, the four next ones are for semi pros and from mission nine you have to be a real Tower Defense expert.

Basically, there are four different heroes, who can each only be used once on the map. The heroes and troops must be set in towers which you build yourself. Better towers offer a little more range and a better protection, since the monsters also attack the units. For each hero there is one unit as back up. Those back ups have, as the heroes do, several abilities which can be reset during a round.

To make it even more confusing, there are different missions goals so that you have a few lives at first as you usually have in a regular Tower Defense Game. Additionally, there are missions where no monster is allowed to reach the end of the map for a certain period of time and missions where buildings along the wayside have to be protected.

The monsters do have certain resistances and can sometimes be totally immune against a specific type of hero. Moreover, there is a spell system with four spells out of four elements. You will really need to be able to use them because otherwise you will not succeed.

And then, there is the skill system, in which each hero skills up individually. According to his dedication and effort one points is always to be distributed, and let me tell you, there are many of those points. Luckily, you can also reset the heroes, which makes it a whole lot more comfortable. If you are confused by now, don't worry. If was confused, too. Heroes of Mangara is definitely no boring, simple, ordinary Tower Defense Game but it's worth getting a closer look at for sure.

Hints and tricks Heroes of Mangara

The druid, succeeds in the first levels only by his healing skill applied at the other heroes and units. Later, you should take care that he can heal from the second line and doesn't get attacked.

Ration your mana and money, because in some cases you just need that specific skill or troop formation.

Are tenacious, once you struggle with a certain level. Your heroes take the won XP with them and next time they'll be stronger.

Great sound, smooth graphics and an awesome gameplay. The playing depth is impressive, the skill system is well balanced. Heroes of Mangara has all it takes to be a superb Tower Defense Game. At this point: Great luck and frustration with Heroes of Mangara. Please be so kind and give us a Facebook-like, Google+1 or Twitter regard. Even better would it be to get a link from you which would help us heaps to become more famous and popular.

Improves a lot after a while. Great fun.

If you enjoyed playing Heroes of Mangara, please take the time to click the "Like" Button below. We use the Facebook Likes to generate our Game-Charts and the more Likes a game got, the higher it ranks.

Comments on Heroes of Mangara