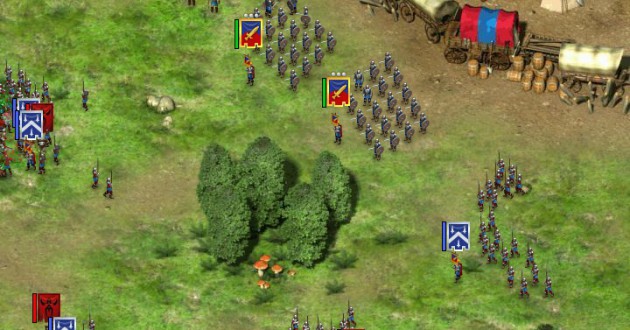 Description of Hordes and Lords

Hordes and Lords is a real time strategy game, in which you control your units in battle. You strive as a human into the fight and you got to beat all kind of creatures out of mythology in it, for instance, a mighty dragon. Who is able to free the country and get all own units to the end will be victorious. A great game by Kongregate.

The game is divided into three parts and played by mouse. At first you formate your troops tactically. Therefore, you drag the banners from the upper left part to the pitch.

The second part demands the fight. The two enemies face each other and you only choose the direction of movement yourself. For doing so you click on the banner of the unit and drag it to a certain point. It is advisable to place the archers in the second line. At the same time you should be aware of boxes, which are only existent for a short period of time. If you reach them with a banner you get a cash bonus. The other income has to be collected from fallen units with your cursor.

After a brawl you reach the main menu and you are able to create new units from here or upgrade yours. Therefore you have to use your money, but don't worry, the missions are replayable as often as you wish to. Especially nice is to extend the map size and the automated coin collection (costs 250 coins once).

Later on new fighters access the field and you should put an eye on your flanks. Peculiarly, against necromancers or the dragon it can become quite tricky.

Nice graphical design, neat gameplay, but personally, I miss the possibility of building up an economy. Running into fights without real reason is at least questionable. Moreover, the controls could have been more accurate. Nonetheless, Hordes and Lords is an entertaining game and it should bring you at least a good hour of fun.

You stupid archers, fall back!

If you enjoyed playing Hordes and Lords, please take the time to click the "Like" Button below. We use the Facebook Likes to generate our Game-Charts and the more Likes a game got, the higher it ranks.

Comments on Hordes and Lords