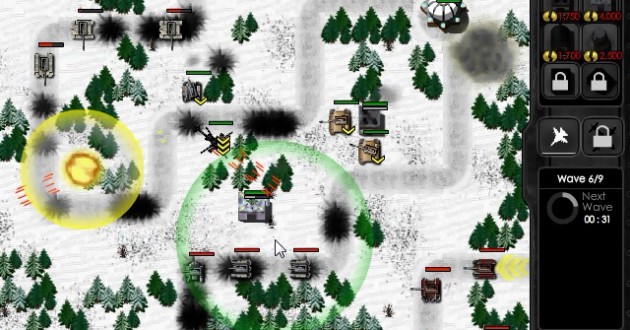 HQ Guardians is definately one of the better Tower Defense Games. There is a short background story which takes place in the military area, many upgrades, and exponantial system consisting of XP and additional a survival mode. Before you start playing you should have a look at the instructions because otherwise disappointment will be there for sure. Unfortunately there hasn't been a statement regarding how many levels there would be in total, since I am personally stuck in mission 16. Soldiers, take care, HQ Guardians are coming.

In the beginning you have to decide whether you'd like to play either the mission mode or the survival mode. You should go for the survival one at the start, because if you're not doing it that way, your save game will get lost and you'll have to start from scratch.

The game is played as a regular Tower Defense Game, the only difference is that you have to build up your production places by yourself. Those are going to be quite near the ways of your enemy especially in late missions and therefore the danger of getting them blown up by the opponents is substantial. Your aim is to defend your headquarter as good as you can. The single manufacturing facilities have a certain armament factor and of course, units cost cash.

Amongst others there are four different manufacturing facilities:

With each further factory the price for a new manufacturing facility rises.

If the first wave is running, all other downstream operations will follow automatically. You' ll probably find yourself a little bit stressed out because the coins for each killed unit has to be collected manually. At the same time you have the possibility to level up your troops up to three times (very important to do so!) and sometimes you need to repair them as well.

For successive missions you receive experience points, which can be invested in a skill table. At first, this is quite easy to do, but you should always put an eye on what kind of new units or skills you fetch. In my first try I chose the cash way but doing so it become tough to unlock new levels. In case you're absolutely stuck somewhere you can replay the last missions as often as you like to save up money and strength.

It is a pity, that you lose everything if you decide to play the survival mode later on, for instance to produce a neat highscore. At the same time it's a waste that you're determined onto your skills and that the game is forcing your processor to work very hard. Apart from those negative aspects, HQ Guardians is a good Tower Defense Game. It is fun to play and once you have build your factories you will need to think about certain tactical formations and in eventual missions you become busy most of the time. Graphics are ok, the background story is good and clear. This is a good TDG, both thumbs up for HQ Guardians.

HQ Guardians is a greatTower Defense Game... and now, how do I survive the 26th mission?

If you enjoyed playing HQ Guardians, please take the time to click the "Like" Button below. We use the Facebook Likes to generate our Game-Charts and the more Likes a game got, the higher it ranks.