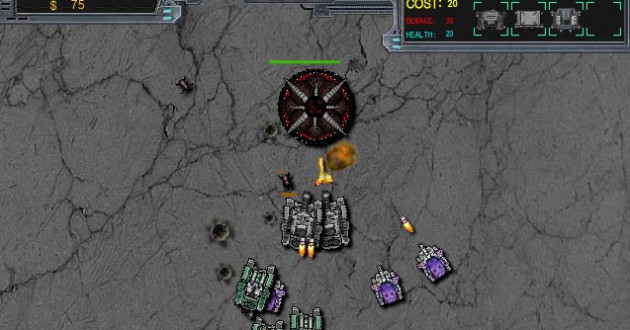 Description of Human vs Zerg

Human vs Zerg is a mixture of Defense Game and Tower Defense Game - inspired by Blizzards Starcraft Universe. The player owns a base (meant to be defended) and can also do attacks against his enemies. There are a couple of different units and towers. Some units needs to be produced, others are classic towers.

At the beginning of a round there is a certain amount of money which is used to extend the base. To do this you click on the icons at the top right. There are basically three factors which determine the expansion: Money, space on the map and the time.

You should be quite sparing with your money because at the end of a round you will be able to buy permanent upgrades on skills. Remaining money will be taken to the next map.

Small hint for Human vs Zerg: It's not that critical if you fail on a mission. Via the main menu you can switch to previous maps and can play them again to gather some money for (upcoming) harder missions. And you should definitely save some money, because $100 won't bring you far.

The game crashes from time to time and that's really annoying. Besides that there is no influence on the minions. You should always select "English" as language, otherwise it might get strange. As the graphics are not that spectacular either, the game is rather average. One positive thing about this game is the sound - but that's basically it.
Even while there is a lot action on screen the fun is limited

If you enjoyed playing Human vs Zerg, please take the time to click the "Like" Button below. We use the Facebook Likes to generate our Game-Charts and the more Likes a game got, the higher it ranks.

Comments on Human vs Zerg