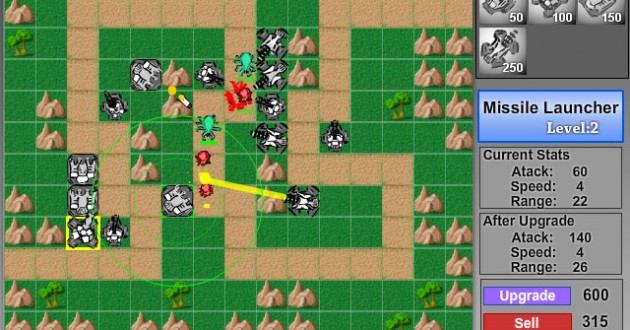 Evil insects want to attack you and you have to defend yourself by some towers. There are six different cards which you have to break clear step by step. The graphic is bad, the sound does not exist, but the game has a requirement, like rarely no other Tower Defense game. As a fan you should test the game once and try to play Insect TD 0.98 from the beginning to the end.

When playing Insect TD it depends especially on builidng the towers at the right time at the right place. Then you have to upgrade the towers and life could start to be easy. It’s not that simple as this. You play the game with your mouse. The towers can be placed on the free fields at the route. You should be able to shoot as possible twice on the card and especially keep the radius of the shoot on the route. Furthermore you could take account of the values for the upgrades. The first 10 levels are for the most part easy, later on it starts to get harder. Later on the cards there are more and more waves and the monsters become stronger, so that you are the most time very busy.

As an advice the rocket towers are recommended, as these towers are distributing a mass damage. Just at the beginning you should arrange some towers on the route, that the small monsters are going to explode directly. In the back the fatal fire has to concentrate on the very at insects, that they can be headed off in the last rounds of the game.

The graphic is lousy, the sound does not exist. All cards have to be breaked clear in one round. If you switch off your computer, you have to start again from the beginning. This is very annoying and for sure in need of improvement. Maybe this is the reason for that requirements of Insect TD 0.98 are very high. Most of the TDGs are in the meanwhile designed in this way, so that already an average player let the waves run simultaneously. If you like it, give us your vote on Facebook oder a +1 at Googgle. Don't forget that you can follow us on Facebook or Google and never miss a new game!

Very challenging Tower Defense, there you find a hart nut to crack.

If you enjoyed playing Insect TD 0.98, please take the time to click the "Like" Button below. We use the Facebook Likes to generate our Game-Charts and the more Likes a game got, the higher it ranks.