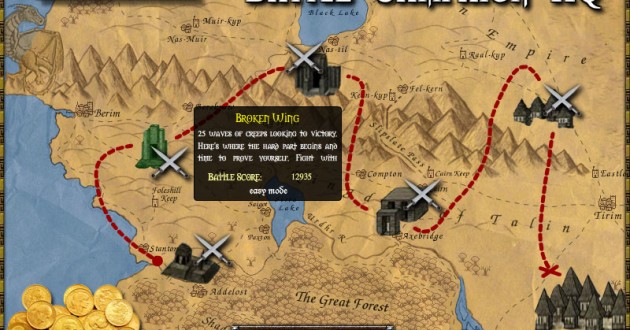 Place different towers and try to stop the rivals, a Tower Defense like always. Completely surprising for frequent visitors of tower-defense.net. In any case, at first view Isteroth stitches with a very nice graphic, offers a playable campaign and has actually some very nice towers on offer. The towers can be set at the roadside and each attribute can be increased seperately. At the first moment it seems to be a really nice Tower Defense Game, unfortunately it is not like that.

The problem is, that monsters can be valued only by life points. They do not have any resistances and each higher tower makes more damage than the strengthened forerunner. You frequently break down your towers to achieve the next generation and finally to challenge the battle. At least there is a wall of fame, where you can compare to other players and to see your current score.

I’d liked to describe the individual towers at Isteroth Defense in detail, but unfortunately it is like that, that they make more damage and that’s it. You should try to get some of the highest towers and try to equip these towers, that you have the chance to fight against everything crossing your way. After some waves the small towers are of no avail and the damage can be unattended.

Some hints regarding the tactic when playing Isteroth Defense. If the map approves it, try to build the towers in a way that the waves can strike hard at the beginning and again on their ends. Unfortunately the limit of building towers is terrible on some maps, so that you can not reach the ways twice or only for short distances, even in a high stage of extension for the coverage. Due to the wavelength this is precious little good. It is more important, that you build less towers, but just enough to arrest the wave. Thus, you have to sell less towers for cheap percentages and later you are able to afford more of the higher towers.

The start screen promises more than the game provides in the end. Very nice are the degrees of difficulties at the beginning of each mission. At least in the higher degrees of difficulties you can find a hard nut to crack, so that you actually have some fun whilst playing your game. Somehow it misses the development in the game. At this point it could be embedded a skill tree. The thing with the monsters is quite horrible. No differences, but only more life points can not be the main task of creeps. At least you should have the feeling playing against a simulated intelligence.

The Tower-Defense Team wishes you an enjoyable game with Isteroth Defense and we hope you have fun! If you like it we would be happy if you vote for our page on Google+ or on Facebook.

Oops, there are escaped some from Protector?

If you enjoyed playing Isteroth Defense, please take the time to click the "Like" Button below. We use the Facebook Likes to generate our Game-Charts and the more Likes a game got, the higher it ranks.