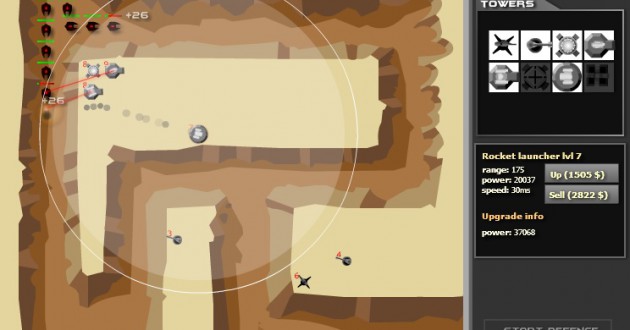 Mahee Tower Defence comes along in a simple way, but remains highly challenging. There are 8 towers available in total, which can be upgraded up to level 9. You have to be on the watch right from the beginning. There is just one map, but you won’t succeed up to level 50 if you’re not concentrated. Be of tough stock and have fun.

Towers are placed by mouse. If you have enough money to build another tower, it will be bright shimmed. If you click a tower you can chose between a further upgrade and selling this tower. During the game, it’s wise to replace older towers by new ones, so that you can deal out more damage. Towers themselves have partially specifics. Rocket-tower e.g. deals damage to multiple enemies and is thus a first choice tower of the game. To receive a chance later on, you should switch to higher class damage dealers. Smaller towers from the start shall not be used anymore.

Mahee Tower Defense is plain, simple and one-dimensional, but for all that challenging, even for experienced players. Sound isn’t available, graphics sucks, and gameplay is pretty boring at the beginning. In the late-game it turns out as a very challenging game, that’s why it gets a recommendation anyway. You won’t have enough until you play Mahee Tower Defense through.

gets pretty hard, is a lot of fun

If you enjoyed playing Mahee Tower Defence, please take the time to click the "Like" Button below. We use the Facebook Likes to generate our Game-Charts and the more Likes a game got, the higher it ranks.