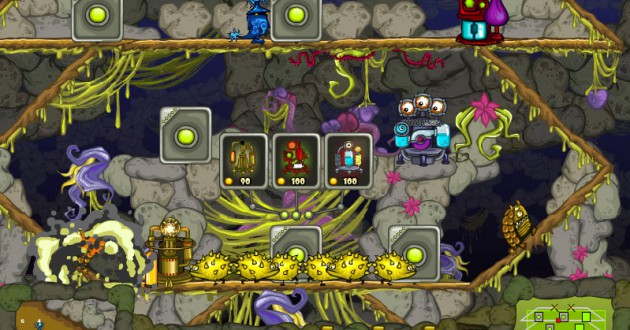 In Monsters TD you have to protect your planet against an invasion of monsters. Those enemies are trying to reach your home planet through a portal and you have several towers at hand to prevent that. In total, there are twelve towers, twelve upgrades and three different spells existent. Additionally, you can unlock 20 accomplishments and can go on the rampage in Monster Tower Defense.

Basically, the game is played via mouse and some keyboard shortcuts:

pressed left mouse button - scroll across the map plus und minus - zoom in and out 1,2,3 - spell selection space - speed up and down enter - start next attack wave

There are three different basic types of towers, which are all to be divided into specialized forces later on in the game (level three). Once you reach the highest possible level with one of these towers you earn an additional booster. In the first missions not all of the upgrades are available. The towers can also be placed only at specified spots. Consequently, it is not possible or only rarely possible to concentrate the firing power onto one specific spot. Later, there are so called tower fields, which have special virtues. For example, you get a 20% improved reach or a higher damage rate for a specific tower.

Regarding the build up you should keep an eye on the fact, to not focus too much on only one tower rather than combine different ones. For instance, you can build an ice tower next to a fire tower. In doing so, you can cause a lot of damage on huge monsters and have it easier to be successful in missions. Likewise, reach of towers is very important, too.

For succeeding in a mission you receive points which can be spend on skills between the mission. In case a monster got away you can replay a mission and reach the maximum amount of XP that way.

Great graphics, neat game play, it could have been a few more missions though. The background music is alright and the monsters are designed smoothly. At times, the game can become a bit confusing, but that probably belongs to it. Additionally, waves can reach you quickly at times, but if you enjoy the genre you will have a whole lot of fun with Monsters TD, a truly awesome game!

Really funny and packed with awesomeness

If you enjoyed playing Monsters Tower Defense, please take the time to click the "Like" Button below. We use the Facebook Likes to generate our Game-Charts and the more Likes a game got, the higher it ranks.