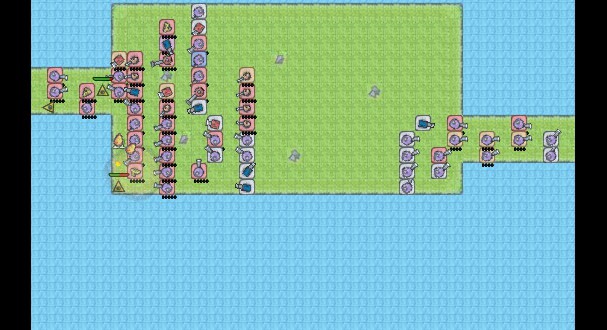 Notebook Defenses released its first offset as a Tower Defense Game. The maker of Notebook Defense TDG had their success in other projects before. ( off to Notebook Wars 3 ) So we can expect a lot.

Notebook Defense is played with the mouse and yet needs getting used to. There are different modes like 'Surviving' or 'Campaign', with three levels of difficulty. You should take the level of difficulty seriously, you'll be well advised to start with easy. You can choose between various towers, nearly each tower has his claim to fame, like Sniper, Ice, slowdown, mass-damage, and good old rifle. Unfortunately, there is no damage over time, what would otherwise be helpful. Next to normal monsters, there are flying units. Flying units won't follow the given path of your labyrinth.

Notebook Defense is on the one hand hard to play, on the other hand beastly annoying. 1. Progress can't be saved. 2. If you build a tower, you have to hit the middle, otherwise the tower will not be build. 3. Game ends after campaign-mission 6, 7 can't be started. Graphics are good and charming, sound doesn't count, enemies are pretty elaborated. After talking big previously, this game doesn't lives up to its promises.

If you enjoyed playing Notebook Defense, please take the time to click the "Like" Button below. We use the Facebook Likes to generate our Game-Charts and the more Likes a game got, the higher it ranks.