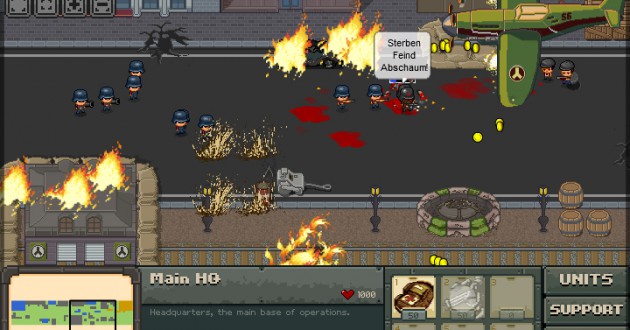 Description of Relic of War

Just consider a different order of events in history. It's World War II and the Germans haven't been defeated and it is 1947 by now. War is still going on with a vengeance and in the meantime an old relict has been found. That is exactly the scenario in which you are going to be thrown in and you will have to bring to prove whether you are man enough to help your side to be victorious in this epic game, which strongly reminds me on real time strategy games. Apart from tactics and troop leadership you will also have to possess loads of dexterity.

The game is played by mouse and keyboard. Luckily, there is a little tutorial in which you learn the basic functions. You always have a headquarter, which needs to be defended, your enemies HQ needs to be conquered. With the help of your new earned money you can buy new troops and send them into battle, again. You can either navigate them by yourself or let the AI do that for you- ti's up to you.

Money is earned by a basic income and for the bigger share from destroying items of your enemy or by killing your foes. You collect the money via mouse.

Unfortunately you can not send infinite units into battle or rather always keep the own population limit in mind.Of course it is possible to increase that limit by building further structure, but even here you will soon meet your boundaries. Each unit is using up a different amount of points. The lonely marksman for instance only needs one point, whereas the heavy battle robot needs many more of them.

Between the single missions it is getting greatly thrilling, because you can redeem your saved points for all kinds of updates. There is a wide range of choices waiting for you, starting with your units right up to additional support within the levels. For each map you can choose between three difficulty levels plus other quests. For each mastered quest sou receive a bonus. The whole game takes a good while.

An exceptional Defense Game, which could almost be considered as an RTG. To me the story appear to be a modicum of cruelty and maybe an alternative background story would have done the job equally at least. But nonetheless, the gameplay is extraordinary well designed and all other things are more or less negligible. Thumbs down for the accompanying storyline, for the rest at least both thumbs up and right down the line Relic of War qualifies for our all star list!

A very good Defense Game, not that easy

If you enjoyed playing Relic of War, please take the time to click the "Like" Button below. We use the Facebook Likes to generate our Game-Charts and the more Likes a game got, the higher it ranks.

Comments on Relic of War