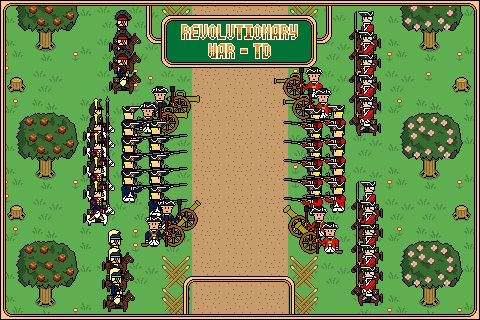 In this initial complicated TDG you reenact the American war of independence. At the beginning Revolutionary War TD is tough to play but it scores later on with a very smart gamedesign. 30 different units, 6 effects on your enemies, 22 different upgrades and 10 generals with 10 different attributes are stirring the gamers blood up. Before you start gaming you should definitely read the instructions to find your way into this game.

First, Revolutionary War TD seems like a normal TDG, certainly the maps are divided in different campaigns you have to play in 2 sundry modes. For unlocking further campaigns and earning claimed medals, you have to beat the maps in normal and difficult mode. From the beginning there are many uncertainties and obscurities you need to figure out. Some of them are dissolving in the late game. In the sauntered area of the game is a book. If you click on this book, you can see your upcoming enemies plus your own units witch their skills. Furthermore, you should choose a general, to take with you on the field. The generals have different skills and features to support you. The actual fight proceeds in a normal way. Units are planted in given areas. If you have earned enough gold, you can upgrade your units later on. If you survive the maps without any loss, you will get 3 stars you can use for further upgrades. If you accomplish survival mode, you'll get a fourth star.

Graphics are pretty bad and at the beginning it seems like there are just 2 maps, what isn't the case. Finally, Revolutionary War TD has its moments and profits from its way of playing, which is pretty smart. Attraction is given through many upgrades and achievements. All in all a solid TDG
finding one's bearings in the menu ist the big challenge

If you enjoyed playing Revolutionary War TD, please take the time to click the "Like" Button below. We use the Facebook Likes to generate our Game-Charts and the more Likes a game got, the higher it ranks.