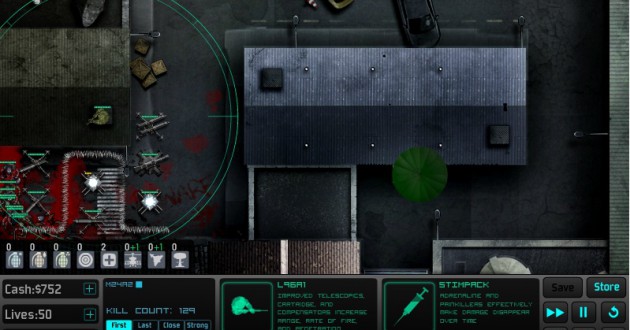 Finally, SAS Zombie Assault is available as distributer's version. A catching and epical Tower Defense Game by Ninjakiwi, who become famous within the TDG squad with their Bloons series. You can either play the game as guest or login to your free Ninjakiwi account. We recommend to create a free account at Ninjakiwi and play it here after that, since our support for the game will eventually help you a lot here. Additionally, you can level up your towers even further and higher levels are reachable. Up to now 13 maps have already been released with three difficulty levels for each map. SAS Zombie Assault TD is a real pearl amongst the Tower Defense games. When the game got released at first we already wrote an article about it (in german): Tipps und Tricks zu SAS Zombie Assault TD.

Within the game there are defense towers on the one hand, on the other hand there are human shooters. While you can place both units free on the map, there are some spots, that are a little elevated but less protected, and are only to be occupied only by archers.

The towers as well as the shooters can be upgraded in two different ways (limited upgrade ability in free play mode!). Once you have started a first wave, the following waves will roll automatically a few seconds delayed.

In addition, there is an air transportation system, which drops items once in a while that can be collected with your mouse. Sometimes, there are even new weapons being dropped. You can see those weapons using the small items on the lower left part of your screen. You should use up all your newly earned weapons in a round in case your arsenal is running out of further space.

For each mastered map you receive a certain amount of cash which can be used for upgrades and other goodies in return. Unfortunately, you will need loads of that cash later eventually, which makes replaying already mastered maps essential. Once you cleared a map for the first time a true windfall is coming over you.

An incredible Tower Defense Game. Personally, to me there is a little too much blood involved. Graphics are great, the gameplay is awesome. The playing time is well balanced. Zombie Assault TD is definately one of the blockbusters in Tower Defense Games nowadays - both thumbs up!

If you enjoyed playing SAS Zombie Assault TD, please take the time to click the "Like" Button below. We use the Facebook Likes to generate our Game-Charts and the more Likes a game got, the higher it ranks.