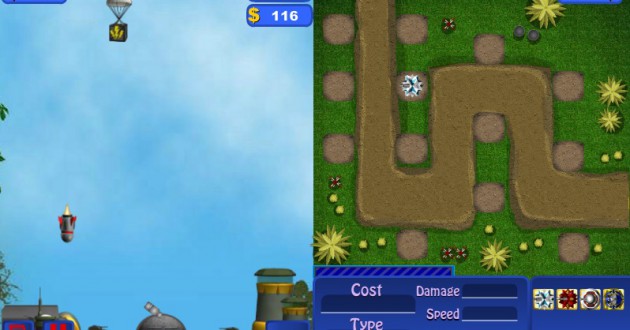 Description of Shoot and Defend

Shoot and Defend is not only a Tower Defense Game but also a sequel of Missle. This means that you get two games in one - and actually both games run in parallel via splitscreen. On the left screen the player needs to defend against missles while the right screen shows a classic Tower Defense experience. That's quite an interesting attempt to enrich the TD-Genre - but as a matter of fact the realization of this idea lags quality.

Die rocketdefense is controlled by the keys "A" and "B". If you manage to hit a rocket you will be awarded with a small amount of gold. That gold can be used to buy additional towers. On each side (of the screen) you own 30 lifepoints. If one of these two counters is down to zero the game is over. There are also boxes falling from the sky. They will drop weapon-upgrades if you hit them. The best upgrade is rapidfire with 3 shots per click.

Some of the towers on the right screen have special abilities, like the poison tower. Every tower can be upgraded 3 times. Those upgrades will provide additional damage, lower shooting intervals and bigger range.

What am i supposed to say? My eyes are glued on the left screen and the TDG part (right screen) lags focus. Besides that the sound is pretty annoying, the graphics rather boring and the overall gameplay lousy. Maybe it was not the best idea to combine strategy and action with a splitscreen. Long story short: I would not recommend Shoot and Defend. Just because of the matter of completeness this game was added on tower-defense.net. A quick look into the game is enough but i would highly recommend to switch to our Tower Defense classics - as there are many games which a better than Shoot and Defend.
Cannon to the left, Cannon to the right, Build Tower ... booooring!

If you enjoyed playing Shoot and Defend, please take the time to click the "Like" Button below. We use the Facebook Likes to generate our Game-Charts and the more Likes a game got, the higher it ranks.

Comments on Shoot and Defend