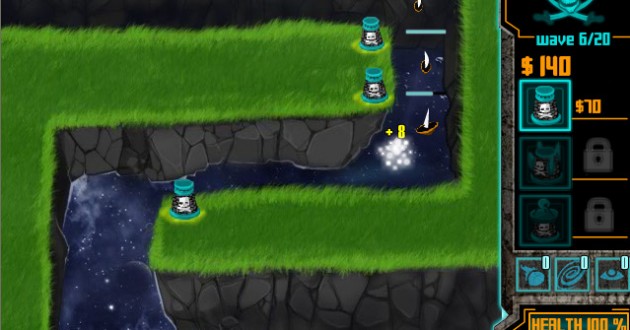 Space Pirates TD is a simple game. There are only three tower which can be upgraded twice each. The maps are sort of small. It seems to me as if you were on some kind of asteroid or something similar and evil space-pirates come along. The actual story as in why you're there isn't told. On the other hand, there are many achievements that can be unlocked. The game itself runs smoothly and clean.

For each ship that you destroy you receive a small amount of cash. That cash can be used again to level up your towers. Some ships even drop special items. That way you can get in possession of meteoroids, more money or vortexes. You click on the towers and once you've got enough cash on hand, you can upgrade it three times. Mostly, the first upgrade is a about higher shooting range, the second one gives you more damage, the third one increases the shooting rate.

Essentially, you should try have a good balance consisting of upgrades and new towers since the ships are going to be stronger and simply more. If you are a good TD gamer you should not get into much trouble.

A solid Tower Defense Game, even though a little bit more depth would have been expectable. The ships are steering towards the three different towers and blows them up in a quite dull manner. The question is, why does Space Pirates still bring fun? To be honest, I don't know myself. I haven't totally finished the game yet but even in between the maps you can upload your high scores if you have a Mochi-account. This seems to me an advantage and I guess the fascination of Space Pirates lies in its simplicity. So, Space Pirates is definitely not the worst TD. Of course, it is not that kind of game which you'll play over and over again, but to play it once in a while it's very suitable. To me, it's little over average.

If you enjoyed playing Space Pirates, please take the time to click the "Like" Button below. We use the Facebook Likes to generate our Game-Charts and the more Likes a game got, the higher it ranks.