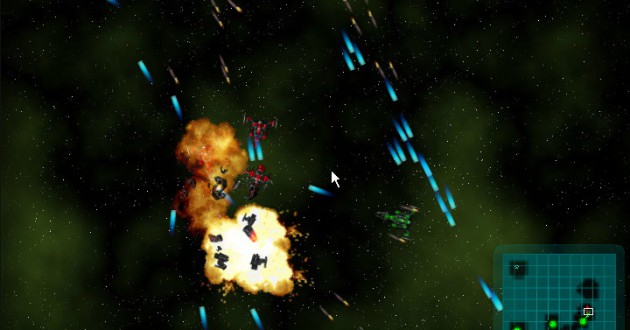 Star Squadrons is a real time strategy game, which is taking place in the interstallar space. Evils powers took a huge part of all known territory under their control and now it is up to you to change history for the good. In addition to the commandership of the fleet, you can conquer new planets and build them up with a working economy. A well designed campaign is waiting to be played.

Both, the usage of mouse and keyboard is required in this game. By mouse you can select a fleet, control ships and enter orders. To deselect a naval formation just press space. If you click on a planet you can also use space to reach the build-menu.

The battle itself is not to be controlled by the player, although it's possible to formate the ships manually for a certain tactic. Once you are on the move the planetary defense doesn't open fire, only batlle spaceships will do so. You got to be very careful here. If you wish to conquer an enemies planet you have to take transporters along. They will relieve the troops automatically as soon as they are over the enemies territory. You should always take care of bringing enough transporters along to seize control the hostile's population. Therefore, success depends on how far the enemies planet is developed yet.

Planets themselves can build up certain upgrades. There are the possibilities of energy, mines, higher population rates and of course fabrics for the units. Once you click on your planet on to the column Units you reach the build-menu. Here you can send up to 100 ships simultaneously into battle.

To see attackings as early as possible it is necessary after you formed your defense well to send a few small spotters into the orbit. That way you can easily find out where to envisage hostile encounters.

Graphics are nice, the gameplay is very well balanced. The difficulty is rising at a pleasant and enjoyable pace. Even the AI doesn't play too bad. Especially when having higher goals it is very important not to allow the opponent to possess too many planets. Once you have got the knack of it, nothing can stop you from creating your own impressive battle ship!

All goes well once the battle ship is created

If you enjoyed playing Star Squadrons, please take the time to click the "Like" Button below. We use the Facebook Likes to generate our Game-Charts and the more Likes a game got, the higher it ranks.