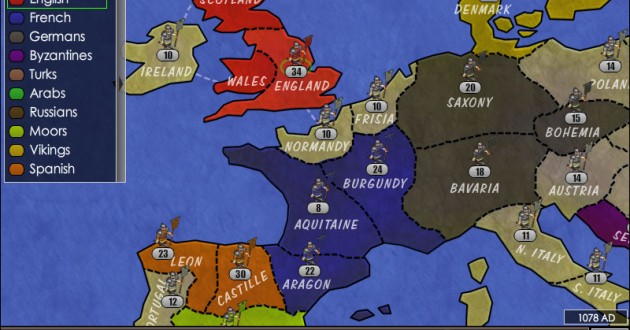 Swordfall Kingdoms is a really awesome Defense Game. The background storyline leads you into the dark ages of Europe. Your aim is to lead your nation to its prime. Above all, tactical decision are more important than anything else and offer one challenge after the other. On the one hand you lead your army into battle on the other hand you can choose automated fight mode. Additionally, there a heaps of inventions to be made and of course, the AI-controlled troops are a bit limited. At first sight, the game reminds me on the board game RISK, only its a proper Defense Game when it comes to the in-fight.

Seven different scenarios are to be played, starting from the battle for Europe to the crusade. The income of each player after a certain right is connected to the total possession of countries owned by them. It's the same principle that counts when it comes to reinforcements. Because of the limited numbers of units that are allowed to be in possession it is very important to plan your troop setup tactically. Otherwise you will be run over by your enemies for sure.

You choose a mission and select a nation. Afterwards you'll have a look at the map. With the arrow keys you can move over that world-map and study all units that have been placed on it. In the upper bar you can read off your funds as well as the amount of units that can still be used as reinforcements on the map. Moreover, you can find the tabs for scientifical-research, recruits, options and end-game. On the right bottom you can see a green arrow which is used for troop movements as well as a sword which sends armies to war.

Each round, every army can move once and attack once, too. If you fight you can choose between auto-fight and fighting manually. You always send your troops into battle from the left side, your opponents faces you from the right.

You win the mission by summing up the required points.

Swordall Kingdoms is a very ambitious Defense Game with a huge strategy part. Personally, I really like it and in case you do not wish to always fight yourself you can make use of the automode function. Graphics are ok and the gameplay is simply stunning. In case you are ready for a bit more difficulty you can simply switch up the game difficulty by one. If you like the game Swordfall Kingdoms, you are welcome to recommend us, give a Facebook-like or Google+1, Tweet or a back-link from your own page. Thanks in advance and great fun!

Like the board game RISK - Personally, I loved it.

If you enjoyed playing Swordfall Kingdoms, please take the time to click the "Like" Button below. We use the Facebook Likes to generate our Game-Charts and the more Likes a game got, the higher it ranks.